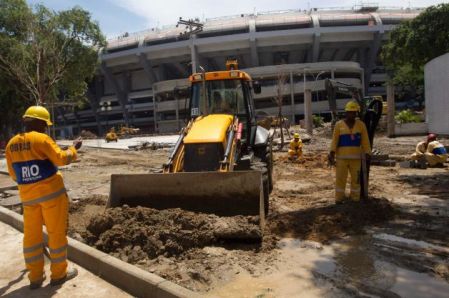 Workers remove mud after heavy rains outside Maracanã Stadium. March 6, 2013
“Here’s the plan: On June 2nd, a bronze statue of Pelé will be unveiled at the inauguration of Rio de Janeiro’s renovations, just before Brazil defeats England in a friendly soccer match. Weeks later, Brazil will win the Confederations Cup on the same field, portending the glorious final match next summer when the national team returns the World Cup to this hallowed ground. Yet with fewer than 100 days until the Confederations Cup begins, the stadium is unfinished—and sometimes underwater—after months of delays and weeks of unwelcome thunderstorms.” The Atlantic

La Liga: Revolutionaries against the Dictatorship

“Syria, Egypt, Libya, Bahrain and many others have recently experienced revolutions as the people have grown tired of the existing rule. Tired of being looked down upon and having to play to the ruler’s tune. Change was needed, and while others have tried and failed, the modern times brought change in the country. A similar movement is on going in the World of Football as well. The Spanish La Liga often claims that its the Best League in the World by citing the various stars on show. The likes of Ronaldo, Messi, Falcao and the rest of the FIFA XI really makes a case for itself. But critics allege that Spain’s primary division is a dominion of two football clubs. Barcelona and Real Madrid have dictated terms in the Iberian country for some years now, showcasing an array of talent and a stronghold of the trophies for the past few seasons. While the two Spanish giants are the only likely contenders for the La Liga crown, it has to be asked, is it really that closed and ‘boring’ a league.” Outside of the Boot

Michael Owen Announces He Is To Retire From Soccer At The End of the Season: The Daily EPL

“Michael Owen has announced that he plans on retiring from soccer at the end of this season, aged 33. The former Liverpool, Real Madrid, Newcastle United, Manchester United and now Stoke City striker has decided to hang up his boots after a stellar 17-year career. Owen won the Ballon D’Or in 2001, as well as medals for one league title, 3 League Cups, 1 FA Cup, 1 UEFA Cup and much more. At Liverpool, he made 216 appearances and scored 118 goals. Michael Owen played 89 times for England scoring 40 goals at an international level. Owen has scored lots of memorable goals in his career, but perhaps this one — for England against Argentina, in the 1998 World Cup — will go down as his most famous one…” EPL Talk (Video)

Carlos Bocanegra went to sleep on the evening of Feb. 5 in San Pedro Sula, Honduras, expecting to play his 111th game for the U.S. national team the following afternoon. Entering his seventh year as captain, the 33-year-old center back had been training with most of the projected starters and was by far the most experienced defender at U.S. coach Jurgen Klinsmann’s disposal.” SI

Statistical Analysis: Has van Persie been the difference between Manchester United and Manchester City?

“Other than the long transfer saga revolving around where Eden Hazard would ply his trade in the summer, there was the drawn out battle for Robin van Persie’s signature. Many neutrals and pundits felt that van Persie would follow former team-mates Sami Nasri and Kolo Toure and join Man City, which led to some surprise when van Persie joined title rivals Manchester United, despite the fact Rooney had scored 27 league goals the season prior. This addition to an already impressive front-line has been a key factor in United’s current 15 point lead over Manchester rivals, City. But has van Persie made the difference between the clubs?” Think Football

“Both teams lined-up largely as expected (with identical 4-2-3-1 formations), except a few niggles for Liverpool prevented them keeping an unchanged XI. The Saints made only one change from their last game at Norwich, Clyne returned to right back, Yoshida moved central and Jose Fonte was on the bench. Pochettino continued with his usual template: a converted centre-forward on one flank, the other occupied by a more natural wide man, looking to add numbers in midfield.” Tomkins Times