Paul Pogba: which clubs could offer him escape from Manchester United? 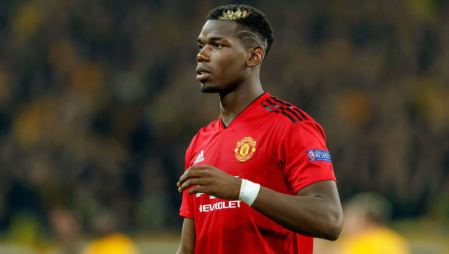 “Paul Pogba, who was stripped of the Manchester United vice-captaincy on Tuesday, could potentially leave the club in January after his relationship with José Mourinho hit an all-time low. But with a salary of £250,000 a week and a fee likely to be in the region of £100m, which clubs have the financial might to sign the French World Cup winner?” Guardian

“Looking for players that contribute on both sides of the ball is often a difficult task. Separating out tactical responsibilities from player abilities, and individual shortcomings from schematic ones is always hard. Does a player not track back because he’s lazy or because he has instructions to remain high up the pitch? Does a midfielder keep passing it sideways because he cannot pick a forward pass or because the manager’s approach calls for conservative possession?” StatsBomb

“Manchester City beat Huddersfield 5-1 in an FA Cup fifth-round replay in March last year. Sergio Agüero scored twice but post-match discussion centred largely on whether he had a future at the club. Pep Guardiola had made it clear he felt there were elements of the Argentinian’s game that did not fit with his vision and had brought in Gabriel Jesus with a view, it seemed, to easing him out.” Guardian – Jonathan Wilson

“By any realistic measure Barcelona had a dominant season last year. They won their domestic league by 14 points, while losing only a single game. They also won their domestic cup. But Barcelona are a club destined to fail to live up to expectations that only they can set. And what came to define their season, more than the raging success of their domestic campaign, was a stunning Champions League quarterfinal defeat to Roma. And so it is that the team which ran up 93 points in La Liga set about correcting for a failed season.” StatsBomb

“Manchester City boss Pep Guardiola says his side will get even better as they deservedly beat Arsenal on the opening day of the Premier League season. The Gunners were playing their first competitive game without Arsene Wenger in charge since 1996 but were well beaten by the defending champions. Raheem Sterling put City ahead in the 14th minute when he got the ball on the corner of the box, cut beyond two players and rifled home from 20 yards.” BBC (Video)

“It was not a goal that clinched a title, or secured a trophy, and it was not a victory that was needed, not a win that changed very much at all. On the surface, when Gabriel Jesus scored in injury time against Southampton on the final day of last season, it was just another goal, just another win. Manchester City had scored 106 times over the previous 10 months; on the way to the Premier League title, Pep Guardiola’s team had won 32 of 38 games.” NY Times