The FA & Racism: Hypocrisy is the Order of the Day 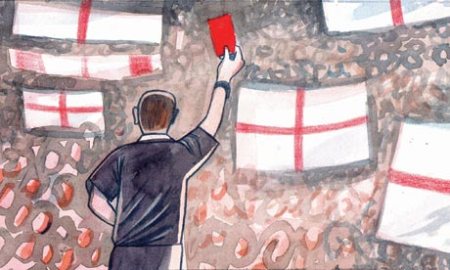 “Probably the last thing English football wanted was another racism scandal, but it’s got one regardless. With Football Against Racism in Europe raising an official complaint about England fans for the abusive chanting directed towards him during the San Marino game, we’re set for yet another round of accusation, counter allegation and all-round ugliness. We have of course been here before – in a situation such as this, there are no winners.” 2nd Yellow

English football is racist, and the FA looks the other way
“Reporting from the Mall during the Queen’s jubilee celebrations last summer, I remember an impromptu rendition of God Save the Queen and feeling quite surprised that its fourth line wasn’t “No surrender”. If you’re used to hearing the national anthem at England football matches, you get so conditioned to those words being bellowed over the four notes between ‘God save the Queen’ and ‘Send her victorious’ that their absence is practically the twitch of a phantom limb.” Guardian

France 0-1 Spain: both sides use one wide player for ball retention and the other for direct attacks

“Spain recorded a narrow victory, and go one point clear of France at the top of Group I. Didier Deschamps used Patrice Evra rather than Gael Clichy at left-back, and the late withdrawal of Mamadou Sakho saw Laurent Koscielny start at centre-back. But the key change was higher up – from the side that defeated Georgia 3-1, Olivier Giroud was dropped, with Yohan Cabaye coming into the centre of midfield, turning a 4-4-2 into a 4-5-1 / 4-3-3.” Zonal Marking

“Borussia Dortmund travelled to play Stuttgart in a key game for the home team. Stuttgart sat in mid table before this game and needed to get a win, or least a draw in order to keep their challenge for the Europa League spots alive. Dortmund needed a win to tighten their group on second spot in the league table. The home side started with a make shift defence as some key players like Serdar Tasci and Cristian Molinaro, resulting in Felipe Lopez making only his 2nd appearance of the season. Stuttgart lined up with a 4-1-4-1 formation. This was done to stop Dortmund playing through their midfield with ease.” Outside of the Boot

“Five Minutes of Your Time is a series of interviews with people from different areas and eras within the game. This one features Leo Morris, a former non-league player and for twenty seven years, Assistant Manager to Gordon Bartlett….” 2nd Yellow (Video) 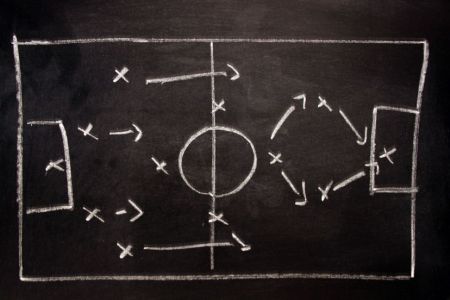 “Certain ways of playing have become imbued with moral values, with certain styles becoming accepted as being the ‘right’ way to play, of representing ‘good’ football. For instance, when Oldham Athletic put Liverpool out of the FA Cup in January by playing a direct game based around the raw physicality of their centre-forward Matt Smith, there was much chortling about their robustness and how Liverpool’s delicate, academy-groomed youngsters ‘didn’t like it up ’em’.” World Soccer – Jonathan Wilson

“Sensational title, eh? Here it comes–the outlandish claim of a rift between Bayer Leverkusen’s Tandem Trainer Saschimi Lewandyypia (see what I did there?) for the site hits! There’s a battle brewing in the North Rhine-Westphalia that might spell DOOM for Leverkusen’s remaining league campaign! Champions League football will be lost–lost I tell you!–if this is allowed to blister in the strengthening spring sun! What’s the limit on exclamation points to start a blog post, by the way?” Bundesliga Fanatic

Weak Barcelona hurt by Celta on their way to Paris

“Barcelona achieved a draw against Celta de Vigo at the Estadio Balaidos in Matchday 29 of La Liga. Cristian Tello and Lionel Messi scored the goals for the Blaugrana, who enjoyed 71 percent of possession, created eight goal-scoring chances and attempted five shots, three of them on target. Surprise, surprise: Once again, Barcelona was considerably hurt by the international break. As a result of their efforts to try to achieve qualification for Spain for the 2014 World Cup in Brazil, Xavi Hernandez and Jordi Alba are now suffering from strained hamstrings and Pedro Rodriguez has sustained a tear in his right calf muscle.” ESPN (Video)