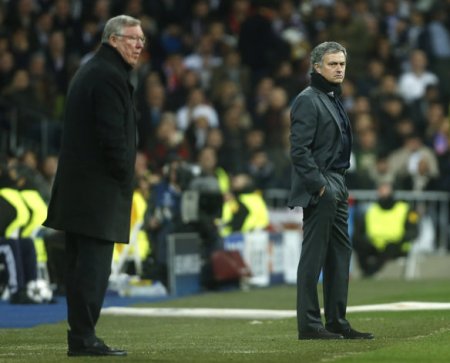 “Manchester United’s starting strategy nullified Real Madrid’s main threats, but Jose Mourinho reacted quickly after United went down to ten. Sir Alex Ferguson left out Wayne Rooney and Shinji Kagawa, favouring Nani and Ryan Giggs on the flanks. Tom Cleverley started in place of Phil Jones, while Jonny Evans dropped to the bench as Ferguson favoured the old-school Ferdinand-Vidic partnership. Jose Mourinho named his expected side. Gonzalo Higuain was upfront rather than Karim Benzema, Raphael Varane continued at centre-back. Sadly, we were denied a chance to see how the 11 v 11 game would play out – Real had looked impotent until Nani’s red card, and it would have been fascinating to see how they tried to break down United in the final half hour.” Zonal Marking

Controversial red card changed complexion of Madrid-United tilt
“There was no doubt about the moment that changed the game. Manchester United had been leading 1-0 on Tuesday night, 2-1 on aggregate, and was winning the tactical battle when, 11 minutes into the second half, Nani leapt to try to take down a dropping clearance from Rafael. His raised foot caught Alvaro Arbeloa in the stomach, and Turkish referee Cunet Cakir decided, to widespread surprise, that he was guilty of serious foul play and showed a red card.” SI – Jonathan Wilson (Video)

Manchester United red with rage after referee wrecks Champions League dream with Nani red card against Real
“When Manchester United’s devastated players finally emerged from the dressing room, they would not, probably could not talk. The club had advised them to stay silent over Cuneyt Cakir’s unspeakable decision to send off Nani. Their inner fury, the anger in the eyes said it all.” Telegraph – Henry Winter

Wins over Man. United and Barcelona give Mourinho an exit strategy
“There is a phrase, borrowed from bullfighting, which the Spanish use a lot: por la puerta grande. Out through the main door, triumphantly. Maybe even on the shoulders of supporters while a crowd gathers at your feet, holding the trophy in the air — a bloodied bull’s ear, in this case, the cup with the big ears if we’re talking football. There are different ways to depart after the fight, many ways to leave, and departing victorious is always best.” SI (Video)

Newsstand: British Tabloids Aflare After Man United’s Controversial Loss To Real Madrid
“Real Madrid eliminated Manchester United from the Champions League today with a 2-1 win at Old Trafford. The English champions led 1-0 after an own goal by Sergio Ramos, but the turning point came when Turkish referee Cuynet Cakir sent off Nani for a studs-high challenge.” SI (Video)

“After a 2-2 first leg draw, Dortmund performed excellently to qualify for the quarter-finals with surprising ease. Jurgen Klopp was still without Mats Hummels, so Felipe Santana and Neven Subotic continued at the back. Otherwise, the side was as expected, and played in the traditional 4-2-3-1, rather than the 4-3-3 we saw against Bayern last week. Mircea Lucescu named Taison on the left wing. Douglas Costa was only on the bench. In a game between two similar sides, Dortmund were better in almost every department, dragging Shakhtar out of shape and exploiting the spaces in behind.” Zonal Marking

Win or bust as Shakhtar Donetsk and Borussia Dortmund meet again
“It was business as usual for Shakhtar Donetsk in the Ukrainian Premier League on Friday, and that in a sense is part of the problem. They hammered Volyn Lutsk 4-1 and lead the table by 13 points with 11 games remaining. They are in the quarter-final of the cup and, with Dynamo Kyiv and Metalist Kharkiv out, Dnipro Dnipropetrovsk stand as the only other probable winners. This has been a crushingly easy season for Shakhtar.” Guardian – Jonathan Wilson (Video)

Borussia Dortmund Make the Big Leap Forward
“Borussia Dortmund have reached the quarterfinal round of the UEFA Champions League for the first time since the 1997/1998 season following an emphatic 3-0 win Tuesday night over Shakhtar Donetsk at Signal Iduna Park. Despite their recent domestic success, Dortmund made a big leap forward in advancing to the quarterfinals following two previous seasons of not advancing from European group stages. While the Ukrainian side held off Dortmund for the first 30 minutes of the match, the uneasy feeling for Dortmund supporters of a result going awry was dispensed with Felipe Santana’s powerful header in the 31st minute, as the Germans went on to create what Coach Jurgen Klopp deemed ‘an extraordinary moment’.” Bundesliga Fanatic

An Obsession With Marcelo: No Madness at All

“On insanity, few have been more veracious than the Chilean writer Roberto Bolaño. In his own inimitable way the nomadic novelist and poet acknowledged what others often refuse to see; that we are all unhinged in our own delicate fashion. To some extent we will freely admit to our peculiarities, but largely our madness is defined by those around us, who witness our behaviour and for reasons of comfort believe it to be more abnormal than their own. How strange it is to be denied even the possession and enjoyment of our own madness by people who yearn to tell us that, yes, we are certainly mad.” In Bed With Maradona