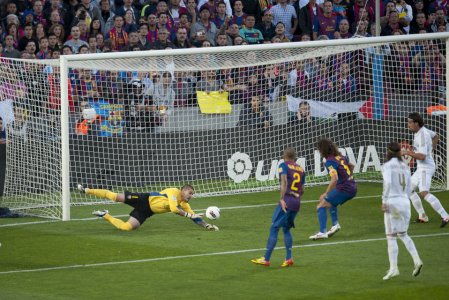 “Things are clicking at just the right time for Real Madrid. In the middle of a season-defining week of matches it’s so far, so good, with a 2-1 victory over Barcelona at the Santiago Bernabeu making it back-to-back Clasico wins against their old foes in the space of five days. It is the first time Los Blancos have produced consecutive Clasico wins since the 2007-08 season when Madrid did the ‘double’ in La Liga.” ESPN

Real Madrid’s Sergio Ramos scores late winner to beat Barcelona
“Two down, one to go. Barcelona have been beaten away and at home; next up in Real Madrid’s season-defining eight-day week, the most important meeting of them all: Manchester United at Old Trafford. Sergio Ramos climbed to head in the winning goal from a Luka Modric corner to clinch a 2-1 victory for Real Madrid after the introduction of Cristiano Ronaldo turned what was at risk of becoming a nonevent into something approaching a clásico. The Portuguese turned everything on its head. If he didn’t actually score, this time it did not matter; if everyone else seemed to have settled for a draw, his ambition remains undiminished.” Guardian

“The best footballer’s autobiography of recent years is probably I Am Zlatan Ibrahimović. In it, the Swedish striker recounts his rise from an ethnic ghetto in Malmö to greatness. Zlatan (as he is usually known) is currently banging in goals for Paris St Germain. Zlatan has a Bosnian father and Croatian mother. They married to get the dad a Swedish resident’s permit, and soon separated. Zlatan’s book, ghostwritten by David Lagercrantz, is an immigrant’s tale. In fact, having sold 700,000 copies in Sweden alone and been published in 15 countries, it’s probably the bestselling European immigrant’s tale since Zadie Smith’s White Teeth (2000). The book was also shortlisted for Sweden’s prestigious lit­erary award, the August Prize.” FT – Simon Kuper

“Second-placed Napoli performed well after the break, but a draw puts Juve in a great position to retain their title. Walter Mazzarri continued with Miguel Britos on the left of his back three, and favoured the experience of Goran Pandev rather than Lorenzo Insigne’s directness. Antonio Conte selected Federico Peluso as his left-wing-back rather than Kwadwo Asamoah, while Giorgio Chiellini was fit to return just behind him. Sebastian Giovinco and Mirko Vucinic continued upfront. Juventus looked stronger in the first half, before Mazzarri’s half-time switch changed the pattern of the game in the second period.” Zonal Marking 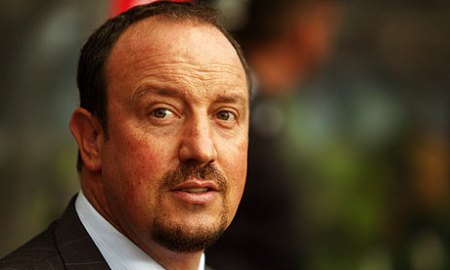 “The assumption, when Rafa Benitez started laying into fans and criticizing the board in a post-match radio interview Wednesday, was that he had lost it, that this was his Kevin Keegan ‘I would love it!’ moment. And then he came in to address the written media and said exactly the same thing, almost word for word. The answer to the first question was 394 words long. Make no mistake: this wasn’t a beleaguered manager suddenly snapping, although the cheeriness of that first press conference 13 weeks ago has slowly become weariness. What Benitez said after his team had beaten Middlesbrough 2-0 was calculated and pre-planned. That raises all sorts of questions about motive, but let’s start with the words themselves.” SI – Jonathan Wilson (Video)

What Mario Balotelli Means For Italy (and Italy)

“In August 1990, just weeks after Totò Schillaci’s exploits at that summer’s World Cup, a shared place of birth would have seemed the only connection between the newborn Mario Balotelli and Italy’s Golden Boot winner. Born in Palermo to two Ghanaian immigrants, Thomas and Rose Barwuah, young Mario had a difficult first few years, undergoing a series of intestinal operations as a toddler. Even after being placed in foster care with the Balotelli family in the northern town of Brescia, the idea that Mario would one day wear the blue of Italy, let alone become a national icon, would have seemed unthinkable. Fast-forward to last summer and Mario Balotelli’s two-goal demolition of Germany in the semi-final of Euro 2012 cemented his fame and sealed his reputation as an explosive yet unpredictable talent. While a highly welcome addition to the Italian national team, his success is especially significant in a country that has often struggled with the concept of national identity as it attempts to reconcile its mixed feelings towards immigration.” In Bed With Maradona

“How does one assess the strength of a league? An obvious answer would be something along the lines of ‘strength’ multiplied by ‘competiveness’ — basically you want quality but also expect unpredictability. Let’s be honest — 2012-13 just isn’t a great season for European domestic football. The Champions League is as exciting as usual and the raw quality is certainly apparent from the major clubs. But in terms of competitiveness, this year has been a disaster. Manchester United lead the Premier League by 12 points, Barcelona lead La Liga by 12 points, and Bayern Munich lead the Bundesliga by a staggering 17 points, while Juventus are a relatively modest six points clear in Serie A.” ESPN – Michael Cox (Video)