Tactics: How the Premier League title contenders shape up 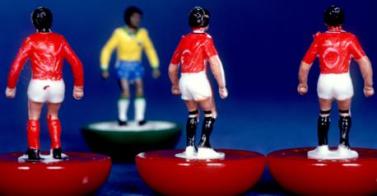 “The Premier League season is less than two weeks old, but a look at how the top sides lined up in their opening matches provides an interesting indication of how they plan to approach the season from a tactical perspective. The diagrams below, screenshots from the ESPN Soccernet website, show the average positions adopted by the players from Chelsea, Manchester United, Arsenal, Tottenham, Manchester City and Liverpool in their teams’ opening home games of the season. (Data is taken only from home games because ESPN’s average position diagrams inexplicably go a bit haywire for away teams.) Average position diagrams do not give a water-tight representation of a team’s formation – which is necessarily in a constant state of flux – but they do offer useful insights into basic shape.” (Football Further)

This entry was posted on Saturday, August 28th, 2010 at 6:38 pm and is filed under Arsenal, Chelsea, FC Liverpool, Football Manager, Manchester City, Manchester United. You can follow any responses to this entry through the RSS 2.0 feed. You can leave a response, or trackback from your own site.