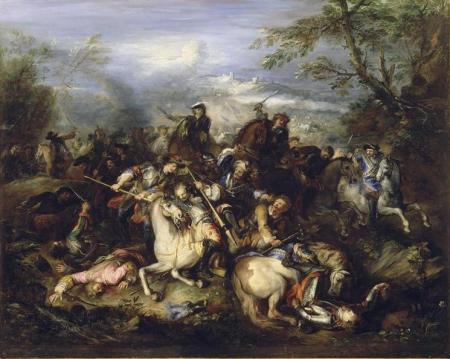 Joseph Parrocel, Combat de Leuze, 18 September 1691
“A dominant performance from City, who weren’t flattered by the 3-0 scoreline. Roberto Mancini made changes on his wings, bringing in James Milner and Adam Johnson for Shaun Wright-Phillips and David Silva. Mario Balotelli wasn’t fit, and Emmanuel Adebayor was omitted. Joleon Lescott played at left-back in the absence of Aleksandar Kolarov.” (Zonal Marking)

The Monday Night Match: Manchester City 3-0 Liverpool
“Well, that’s one question answered, at least. Those that had been wondering how long it would take Manchester City’s diamond-encrusted team to gel this season have their answer, and it is quite a specific one – give or take a few seconds, it took one match and twelve minutes before the team clicked into place and from then on the result of this evening’s match was never in a great deal of doubt. While City gelled, Liverpool were oil and water.” (twohundredpercent)

City smash sorry Reds
“Manchester City flexed their enormous muscles at Eastlands tonight to delight the man who made it all possible and deliver their biggest beating of Liverpool since 1937. Sheikh Mansour could not have picked a better night to watch the team he has spent £1 billion on in a league game for the first time.” (ESPN)

City slickers hit their stride
“Once deemed the final piece in the jigsaw, then a cause of controversy, now the architect of their downfall, Gareth Barry has become a byword for bad tidings for Liverpool. This is the player for whom Rafa Benitez was willing to sacrifice Xabi Alonso, the one he really wanted when the club bought Robbie Keane and the man who became the reason for escalating tensions.” (ESPN)

Manchester City roll back the years as Mancini’s mentality takes hold
“The first thing to say about Manchester City is that for a team of fractious individuals, mercenaries and strangers, only there for the money – and, please, can someone explain how they are possibly going to keep them all happy? – and led by an unpopular manager who doesn’t speak to the players (and will probably be gone by Christmas anyway), they didn’t do too badly, did they?” (Guardian)

Manchester City 3-0 Liverpool – Video Highlights, Recap, and Match Stats – EPL
“Manchester City played their first home match of the 2010-11 EPL season with a match against Liverpool on Monday, August 23, 2010. The match highlights can be found here at Free Soccer Highlights.” (The 90th Minute)

“Soccer analysis focuses on particular moments of the game, usually highlights or events preceding a goal. Goals are nice to watch and few events preceding the goal keep it comprehensible. Advanced chess players might be able to do better, but in general we memorize around seven to nine events. In the short term, judging player performance is based on seven to nine actions. Let alone putting those actions back in to team perspective.” (Sport Analysis)

“Author’s note: It’s that time of year again where I’m preparing to teach several sections of Intro Psychology, so I thought I’d try to combine purposes and put something together drawing on the section addressing sensation and perception. It is apropos of nothing in particular, but does fit with my occasional series on ‘a mental game’ where I’ve written about sports psychology, group conflict, and happiness.” (Pitch Invasion)

The Price Of Inter’s Success

Wesley Sneijder
“There’s no doubt that the 2009/10 season was a triumphant one for FC Internazionale, better known as Inter, as they became the first Italian team to complete the treble by winning the scudetto, the Coppa Italia and the Champions League in a single year. In fact, Inter have been the dominant force in Italian football ever since the Calciopoli scandal in 2006, winning five league titles in a row, the first time this has been done since Juventus achieved the feat in the 30s.” (The Swiss Ramble)

Thoughts from the weekend: River vs Independiente

“I’m going to start a series today based on my thoughts about the match (or one of the matches) I attended over the weekend in the Argentine Primera División. The weekend just gone, that was Sunday’s clásico between River Plate and Independiente. The home side need as many points on the board as early as possible in their battle against relegation, whilst the visitors had started the season underwhelmingly and, after last year’s title challenge, remain impatient for a win. I headed to the match to see whether Ángel Cappa had managed to improve his team with a proper pre-season.” (Hasta El Gol Siempre)

Dortmund 0-2 Leverkusen: Dominance down the right decides the game in the first half

“An interesting game here, because a 4-4-2 defeated a 4-2-3-1 – intriguing, in the light of Sampdoria, Tottenham and Liverpool’s recent problems with 4-4-2. Dortmund played a fairly basic 4-2-3-1 system, with the main point of interest being the debut of Japanese international Shinji Kagawa, a highly-rated attacking midfielder signed over the summer from Cerezo Osaka.” (Zonal Marking)