“Every summer, football clubs all over the world throw their money away. In Granada CF’s case, quite literally. One morning in July, the Spanish second-division team awoke to find that the money earned from season-ticket sales — which it had handily “stored” in bin bags — had been thrown out by the cleaner. Already racked by debt and in administration, Granada had lost an estimated $500,000 thanks to a woman with a mop and bucket. Luckily, in the end most the cash was found in a recycling box.” (SI)

“Unlike the majority of their Premier League counterparts, Newcastle United’s squad seems to askew cosmopolitanism. Buttressed by an English spine, you can almost taste its Carling-flavoured depth. This isn’t to suggest Geordies are a xenophobic bunch – rather, it’s a reflection on a monotonous birthplace-list nestling in a place where Wigan Athletic don’t include a single Englishman in their first-XI.” (Defensive Midfielder)

“Thanks to growing up with boys – I’ve got five brothers – I started watching football out of boredom as I didn’t want to spend the whole time alone by myself. That was how it all began. I wasn’t even born when he was at his peak with Liverpool but, thanks to the genius invention of video recorders (and my brothers) I was able to relive the unseen action later in life. He is the reason why I became a Liverpool fan, “he” of course being the unstoppable Ian Rush. The legendary Welsh number nine who wrote history at Anfield.” (The Equaliser) 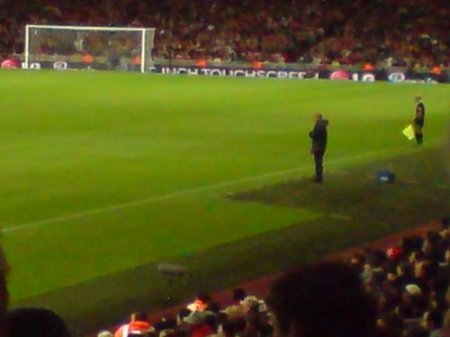 “A routine victory for a Tottenham side that always looked in control, and are now into the Champions League for the first time in the club’s history. Harry Redknapp made a few changes to last week’s side – Peter Crouch replaced Roman Pavlyuchenko (who, despite his late wondergoal, was awful in the first leg), whilst Tom Huddlestone came into the midfield alongside Wilson Palacios, Aaron Lennon was selected instead of Giovani dos Santos, and Ledley King got a start too.” (Zonal Marking)

Auxerre 2-0 Zenit: Two goals from corners and two red cards
“Auxerre progress thanks to two goals from corner-kicks, against a frustrating nine-man Zenit side. Jean Fernandez made one change from the first leg, surprisingly dropping Walter Birsa and bringing in Roy Contout in the left-wing position. Otherwise, they played the same conservative 4-4-1-1 system, with Anthony Le Tallec trying to combine with Ireneusz Jelen upfront.” (Zonal Marking)

Ajax 2-1 Kiev: midfield changes win the game for Ajax
“Ajax beat Kiev 2-1 to advance to the group stages of the Champions League. In a match that, in the end, brought both relief and confidence, Ajax’ common 4-2-3-1 had a tough time against Kiev’s defensive 4-4-2. Jol’s essential midfield adjustments turned the game around, and in a climatic closing ten minutes, Ajax managed to get away with a 2-1 victory.” (11 tegen 11)

“FC Barcelona hosted AC Milan in the Joan Gamper Trophy match on Wednesday, August 25, 2010 can the Camp Nou, which is their annual pre-season fixture just before the start of the domestic league season. The match highlights can be found here at Free Soccer Highlights.” (The 90th Minute)

“Roy Hodgson has accused Rafael Benítez of reneging on an agreement not to sign Liverpool players after Dirk Kuyt’s agent claimed the Holland international wants to leave for Internazionale. The Liverpool manager received an assurance last week from Massimo Moratti, the Inter president, that the European champions had ended their interest in Kuyt and Javier Mascherano, who has since become a target for Barcelona.” (Guardian)