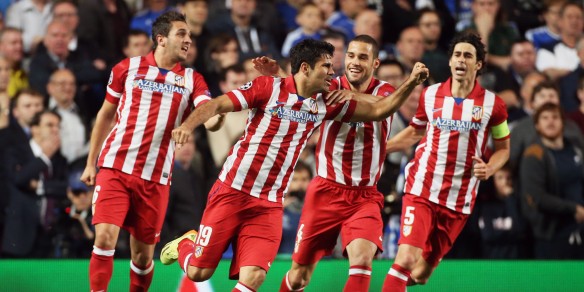 “After a fantastic season which saw them crowned as La Liga Champions, Atletico Madrid is now starting over from scratch. Diego Simeone’s squad lost many talented players as Striker Diego Costa and Left Back Filipe Luis departed to Chelsea as Los Colchoneros received €58M  for the two players combined (Diego Costa 38M, Filipe Luis 20M).” Outside of the Boot

“Brendan Rodgers forged his managerial reputation at Swansea City on the back of a possession-heavy philosophy, and it was widely expected that this approach was to be a permanent feature of his time at Anfield. Early in his tenure, the Ulsterman famously told a fansite briefing: I’ve always enjoyed and worked with the statistic that if you can dominate the game, with the ball, you have a 79% chance of winning a game of football. If you’re better than the other team, with the ball, you’ve got an 8 out of 10 chance of winning the game.” Tomkins Times

“Normal rules do not apply to Real Madrid. President Florentino Pérez laughs at your Moneyball. He mocks your concerns over things like value. Real Madrid are different. They are the best team. They have the most money. Whoever they want, they get. Pérez is the man who brought Ronaldo (both of them) and Zidane to Madrid. Last summer he bought Gareth Bale. This summer is no different. World Cup superstars James Rodríguez and Toni Kroos are the latest addition to the current iteration of the Galacticos, while Ángel di María seems to be on his way out. This is what Real Madrid does. Will it work? That’s another question entirely.” Grantland

“Brazil 2014 followed an all too familiar script for the Ivory Coast, with the Elephants of West Africa once again buckling at the key moments. For over a decade the Ivoirians have been plagued by an inability to mould their array of talent into a unit resembling anything near the sum of their parts. At the same they have consistently struggled psychologically with the mental challenges associated with tournament football – their failure to win any of the last five African Cup of Nations (AFCONs) in spite of entering them all as resounding favourites being vindication of that flaw.” backpagefootball

“Most of the bad press has revolved around Qatar 2022, but after the tragedy of Malaysia Flight 17, some politicians in Europe are asking that the next tournament to be reconsidered. Thousands of students gathered in the plaza, protesting peacefully and planning their next moves after a summer of anti-government unrest. Then the soldiers came and the shooting started. Police and the military opened fire, killing dozens, perhaps hundreds. This was Mexico City, October 2, 1968: ten days before the Mexican capital held the summer Olympic Games and less than two years before the country hosted what proved to be one of the most fondly-remembered World Cups. Despite the bloodshed, the world played on.” Fusion

“The Football Supporters’ Federation is calling on fans to join a march on the Premier League and Football League headquarters on 14 August to protest against spiralling ticket prices and demand “affordable football for all”. This demonstration, setting off from London’s Marble Arch, has become an annual fixture, as clubs have shown no inclination to use their TV rights windfalls to reduce historically inflated ticket prices.” Guardian

“While a nation rejoiced in the city of Berlin as Die Nationalmannschaft returned home with the coveted World Cup for the first time since reunification, a calming aura was captured in the heart of Munich: Franck Ribéry completed his first training session with FC Bayern since an unfortunate back injury ruled him out of participating in Brazil. The moment Bayern Munich defeated Borussia Dortmund in the DFB Pokal final, a colorless Ribéry first began to trudge into his own abyss of doom. A man once known for his bombastic celebrations (he attempted to lightheartedly escape with the DFB trophy after winning it in 2010), Ribéry was uncharacteristically reserved throughout this celebratory night. Caught in two minds, his aloofness may have stemmed from a physically damaged state and an overwhelmed psychology.” Bundesliga Fanatic