A Late Entry Helps the Dutch Avert an Exit 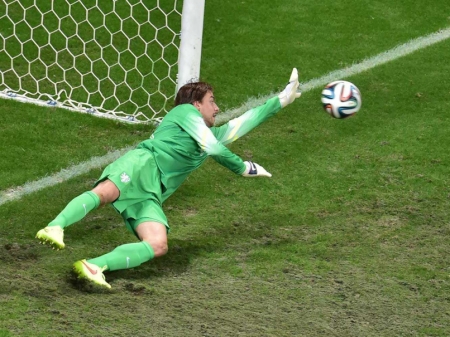 “With a World Cup quarterfinal in the closing moments of extra time on Saturday, Louis van Gaal, the coach of the Netherlands, made a move that was as bold as it was rare. As penalty kicks loomed in a 0-0 game, he replaced his starting goalkeeper, Jasper Cillessen, with Tim Krul, who had not played in the tournament but was confident to the point of haughtiness in a 4-3 victory in the shootout. After growing frustrated against Costa Rica, which seemed mostly content to sit back, surrender possession and play for penalty kicks, the Dutch became assured and clinical. The Netherlands made all of its penalty kicks, and the 6-foot-4 Krul made two dramatic saves after appearing to try to intimidate the Costa Ricans.” NY Times

Netherlands 0 Costa Rica 0 (4-3)
“Goalkeeper Tim Krul came off the bench late in extra time and saved two penalties as the Netherlands beat Costa Rica in a shootout to set up a World Cup semi-final against Argentina. Newcastle’s Krul saved from Bryan Ruiz and Michael Umana to send the Dutch through after the game finished 0-0. Wesley Sneijder had hit the woodwork twice for the Dutch, while Robin van Persie’s shot was turned onto the bar. They face Argentina, who beat Belgium, in Sao Paulo on Wednesday in the semis.” BBC

“As unlikely as it may seem given the résumés of the two nations involved, including the seven combined world championships, Argentina and Brazil had never reached the semifinals in the same World Cup until this year. With a 1-0 victory over Belgium on Saturday thanks to a goal by Gonzalo Higuaín, Argentina joined Brazil, which beat Colombia on Friday, in the final four. The possibility exists that the two teams, South American giants and bitter rivals, could face off in the final in Rio de Janeiro, which many feel would provide the most fitting conclusion to this World Cup. Argentina, the winner in 1978 and 1986, is back in the semifinals for the first time since 1990, when a rough group coming off a title relied heavily on the skills of Diego Maradona and Claudio Caniggia, who did just enough to win, before losing to Germany in a desultory final.” NY Times

Argentina 1 Belgium 0
“Argentina reached their first World Cup semi-final since finishing as runners-up in 1990 with victory over Belgium in Brasilia. Gonzalo Higuain scored the only goal at Estadio Nacional, a thunderous early strike that ended his run of six international games without a goal. But Belgium’s so-called golden generation were undone by another quicksilver Lionel Messi performance, as Argentina set up a last-four encounter with Netherlands in Sao Paulo on Wednesday.” BBC

Germany 1-0 France: Germany get the better of the midfield battle

“Mats Hummels’ early header from a Toni Kroos free-kick was the difference in a peculiarly tame, flat contest. Jogi Low made two significant tactical alterations to his side, moving Philipp Lahm to right-back, and bringing in Miroslav Klose upfront. Didier Deschamps, as expected, returned to a one-striker system with Antoine Griezman replacing Olivier Giroud, and Karim Benzema shifting upfront. Germany dominated the first half with some good midfield play, and then the second half was…almost non-existent, with France barely launching a fightback.” Zonal Marking

“Goals from both centre-backs put Brazil into the semi-finals. Luiz Felipe Scolari made a straight swap at right-back, with Maicon in for Daniel Alves, while Paulinho replaced the suspended Luiz Gustavo. Colombia coach Jose Pekerman surprisingly brought in Fredy Guarin in central midfield, with Abel Aguilar dropping out. The story here was the sheer physicality, aggression and brutality of the game – to be frank, not much football was played.” Zonal Marking 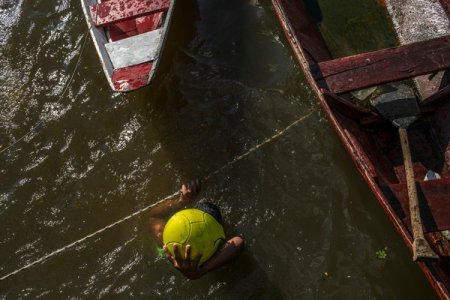 “In this floating village, there is only one way to travel. Students go to school by boat. Pentecostals go to church by boat. Taxis arrive by boat. Even the soccer field is often a boat. There are three homemade fields on land, but they are submerged now in the annual flooding of the Black River, which meets nearby with the Solimões to form the Amazon. If the wooden goal posts had nets, they would be useful this time of year only for catching fish. So young players and adults improvise. They play soccer at a community center that has a roof but no walls. They play on the dock of a restaurant. And they play on a parked ferry, a few wearing life jackets to cushion their falls on the metal deck and stay afloat while retrieving the ball from the river.” NY Times

How the World Cup Is Damaging Brazil

“Don’t believe journalists who tell you the tournament is going smoother than expected. In a normal month of June, Rio de Janeiro hosts at least 16 first-division soccer matches. São Paulo will typically see the same number. Salvador usually has around 8; ditto Recife, Fortaleza, Porto Alegre, Belo Horizonte, and Curitiba. None of these cities will host more than seven during the World Cup.” Fusion

“A Colombian defender named Juan Camilo Zúñiga ended the World Cup for the Brazilian star striker Neymar on Friday with a nasty knee into Neymar’s back that fractured one of his vertebrae. It was an ugly play and a bad foul. It deserved, at least, a yellow card. Yet within any game, there is always a road map to every flash point. The beauty of soccer’s continuous flow is that one thing leads to another (and another and another), and that makes it possible to trace a path to a game’s most memorable moment. In a game like Friday’s, doing so makes it easier to see where things went wrong. So what happened to Neymar? How did the face of this tournament end up in a hospital? Brazilian fans will not like to hear it, but while Zúñiga was directly responsible for causing Neymar’s injury, Neymar’s teammates — specifically Fernandinho, though there were others — as well as the referee, Carlos Velasco Carballo, deserve their share of the blame, too. They did not commit the crime, but they contributed to an environment of lawlessness that led to Neymar’s being battered.” NY Times

“… Paul Pogba. France’s midfield has won many an admiring glance over the course of their World Cup journey and the match-up against Germany saw the clash of the 2 arguably best central midfields. With Cabaye playing in the regista position, both Matuidi and Pogba have been responsible for providing thrust to the French attack using their physicality and embarking on their trademark driving runs. … Raphael Varane. Despite being only 21, Varane was France’s first choice centre-back leaving Koscielny and Sakho to battle it out for the other position. The Real Madrid defender had a decent game but in the end the solitary goal of the game came directly as a result of his error although credit must be given to Mats Hummels too who was excellent on the night aside from his goal.” Outside of the Boot