“After an enthralling month of football, the World Cup has finally reached it’s end. It was expected to disappoint like the previous edition, but what transpired in Brazil left many claiming it as possibly among the best yet. It had everything, and a little more; from Spain’s early elimination to Costa Rica’s unbelievable run, Brazil’s humiliation to Algeria’s display, James Rodriguez’ goal to Ochoa’s save, and so much more in between. The spectacle culminates into one final clash between two sides who as the fixture list suggests, deserve to be there. It’s been incredible, and Outside of the Boot have been there every step of the way with regular content for our readers. On this historical day we take a look at this memorable journey of the two finalists through our tactical lens.” Outside of the Boot

“Germany and Argentina square off for the World Cup trophy in Brazilian soccer’s Mecca, Estádio​ do Maracanã, in Rio de Janeiro on Sunday. The game is littered with storylines, legacy implications and star power and promises to provide a thrilling ending to what has been a riveting World Cup. Our live chat for the spectacle will kick off at 2 p.m. ET, leading up to the 3 p.m. first kick (ABC/Univision). In the build-up until then, our Brian Straus, Jonathan Wilson, Liviu Bird, Adam Duerson and Tim Newcomb have compiled everything you need to know about the clash with a World Cup Final 101 crash course…” SI

“The yellow-clad fans arrived at Estádio Nacional later, more quietly and with far less face paint than usual. And no wonder: They were attending the World Cup’s third-place game, a match that newspapers around the world had called ‘a meaningless exercise,’ ‘a pointless sideshow’ and ‘the final insult.’ André Gonçalves, 48, an accountant in Brasília who was attending his fifth game in the stadium with his family, was struck by the difference in the scene outside the stadium Saturday afternoon before the Netherlands played Brazil. ‘This silence, this calm,’ he said. ‘It conveys sadness.’ André Galvão, a reporter for TV Bandeirantes, was having trouble finding the usual energy from Brazil fans.” NY Times

“Manuel Neuer is the latest in a line of German goalkeepers regarded by many as the best in the world. German soccer fans often reminisce about the greatness of Sepp Maier and Harald Schumacher and Oliver Kahn, and if Neuer helps Germany win the World Cup final on Sunday, his place in history — even in the middle of his career — will be secure. Yet there is also a darker side to the lineage of German goalkeepers, an incident that lingers over German fans and also started Neuer along his current path.” NY Times 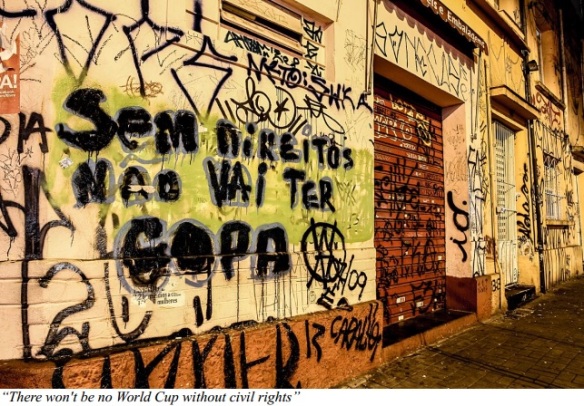 “As the World Cup in Brazil comes to an end without the predicted large-scale protests, there’s been a subtle but consistent message visible on the streets, as photo-journalist Gabriel Uchida has documented. ‘Pichação’ is the punk brother of graffiti. Pichadores don’t want to make art, they want to shock, to vandalize. It’s made to be ugly and agressive. In Brazil it was born in São Paulo and their main influence was the typography of punk rock and heavy metal band logos. Although it is illegal, it’s the most current cultural expression in the Brazilian streets. It’s possible to see ‘pichações’ everywhere, even at the top of the highest buildings. As it’s made to protest, recently Brazilian ‘pichações’ have found a new target: the World Cup.” World Cup 2014

The Rio the World Cup didn’t show
“There’s shit in the water. Two days after Brazil crashed out of the World Cup, on Thursday morning, one of Rio’s foremost sanitation activists, Leona Deckelbaum, came down to Copacabana Beach to work. She couldn’t help laughing. Tourists swam in the ocean across the street, and up and down the coast in both directions. In a city with a terrible sewage system even in the fancy neighborhoods and no complete sewage or water service in any of the 900-plus favelas, this is a terrible idea.” ESPN

“Argentine fans unfurled a banner at a World Cup semifinal match in São Paulo depicting Diego Maradona on one side, Lionel Messi on the other and Pope Francis in the middle. The fans chanted, ‘Olé, olé, olé, Messi, Messi,’ but the relationship with their star remains complicated. A full embrace will not come unless Messi can win soccer’s ultimate prize against Germany on Sunday, just as Maradona did in 1986.” NY Times

“In writing on sport there is always a fine line between reading too much into what happens on the field and reading too little into it. The problem is particularly acute when it comes to the World Cup: no other sporting event creates the same torrent of hyperbole and cliché, or incites quite the same kind of grandiose pontificating. The best of sports writing and commentary manages to deal with this through a combination of grace, humor, and true emotion: something that the Men in Blazers have offered us, thankfully, on ESPN, and that has defined the wonderful writing of Brian Phillips for Grantland during the tournament.” New Republic – Laurent Dubois

“Will it be the goal fest of 1986 or the negativity of 1990? History will repeat itself with an Argentina-Germany rematch in the World Cup final. But will we get the thrills of 1986 or the grotesqueness of 1990? Unfortunately, signs point to the prospect of a conservative, low-scoring affair on Sunday at the Maracanã. Nearly everyone realizes the best tactics against Germany are to pack it in and counterattack. (Everyone except Brazil, that is). And that has been Argentina’s approach, anyway, so there is little chance the Albiceleste will change.” Fusion