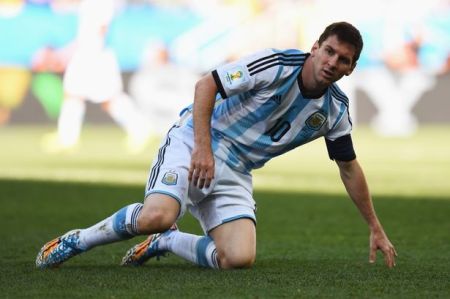 “In Argentina’s final match of the World Cup, Lionel Messi — on whom Argentine hopes have rested for over a decade — only touched the ball at a rate of once every two minutes. One of those touches was a great opportunity to win the game near the end of regulation, which he failed to even put on goal. Despite this, and despite a decrease in goals and assists as the tournament progressed (four goals in his first three games, an assist in his fourth, and nary a goal or assist since), he won the World Cup’s Golden Ball award (essentially the tournament MVP). That prompted Diego Maradona, Messi’s Argentine forefather and foil, to say, “It’s not right when someone wins something that he shouldn’t have won just because of some marketing plan.” The sharply worded op-eds, so plentiful on Sunday and Monday, are dying down — for now — but even Messi’s fans may start to wonder what was going on, and whether Messi was playing like his usual self.” Five Thirty Eight

Why the United States Needs a Football Revolution

“It was great fun, wasn’t it? The determination, the refusal to quit, the passion, the belief that running until it was physically impossible to run anymore was easier than acceding to defeat. Oh, yes, the United States at this World Cup gave Americans a team to be proud of, but it did not deliver on Jurgen Klinsmann’s 2011 promise to play progressive, attack-minded football. While the U.S. had grit, it lacked a coherent national style. The development of a national playing style, or even general philosophy of how the game should be played, is an important moment in a country’s footballing history.” 8 by 8

“The World Cup doesn’t end so much as it slips back into itself. As soon as the whistle is blown one last time, the recaps, the nostalgia, and the smart surmises begin. But then, a day later, after the last team has returned to its home country and the cheers of hundreds of thousands of euphoric fans, the specifics start to stretch beyond the immediate recall they enjoyed during these June and July days. The locations and stadia whose names were on the tip of your tongue begin to hang back as you go forth with your life. You’ve suddenly forgotten the name of that player you didn’t know on that team you weren’t familiar with—the player you’d enjoyed so much that you’d learned to pronounce his name perfectly. Or, if you’re American and have grown through this tournament to love the game, the world may suddenly seem farther away again. The excuses to strike up a conversation with a stranger dwindle. The news of the rest of the world starts with the Middle East again. And left to fend for themselves, the details of your World Cup experience begin to connect their own dots.” The Paris Review

A World Cup of Broken Ideas

“When it was all over, Messi stood there dejected and alone, holding the Golden Ball as the World Cup’s best player. It was a hollow consolation, one he didn’t want and probably didn’t think he deserved. As he walked up the stairs to receive his prize, some fans reached out to touch him. But most Argentinians sat—as subdued as they had been in weeks—clapping quietly, watching Messi fail to become the emblematic hero an entire nation had hoped he would. The World Cup has a way of amplifying things. Goals become national statements. A poor performance becomes an affront to the flag. Every action is bigger and holds more importance—and, inherently, holds some symbolic meaning.” 8 by 8

“Documentary telling the story of legendary Brazilian footballers Pele and Garrincha, whose emergence following Brazil’s defeat at home in the 1950 World Cup Final heralded the dawn of a golden age of football for the country. But while one man became known as the world’s greatest footballer, the other died a broken alcoholic at the age of 49.” YouTube: Gods of Brazil 1:09:59

“As the World Cup drew to its conclusion amid the colour and splendour of the Maracana in Rio, England’s brief and undistinguished contribution to Brazil’s World Cup did not even merit a footnote. Blink and you would have missed them. Months of preparation amounted to defeats by Italy and Uruguay in the space of six days before England manager Roy Hodgson and his squad were making the plans for the flight home. When the story of Brazil 2014 is told, it will be a tale of ambitious attacking football, Luis Suarez’s bite and the World Cup semi-final carnage inflicted on the host in a 7-1 loss to Germany that will be revisited as long as the tournament is staged. England? Move along. Nothing to see here.” BBC

“Of all the lasting images from the 2014 World Cup, the officials who run FIFA, soccer’s governing body, should be forced to remember one, above all: Germany’s Christoph Kramer staggering around the field in the final, glassy-eyed and dazed, like a sleepwalker. It was a glaring symbol of FIFA’s misguided approach to concussions and how desperately it needs to amend its substitution rules, which now allow for only three replacements per game and dictate that once a player is out of the game, he stays out. Faced with those restrictions, coaches are hesitant to keep a player with a possible head injury from leaving the match.” NY Times