“In the very end—after the comeback goal from Julian Green, a nineteen-year-old World Cup débutant; after the close-range miss from Clint Dempsey that almost levelled it; after the final whistle that sent Team U.S.A. home; after the expressions of pride from Alexi Lalas in the ESPN studio on Copacabana Beach; after all the grandstanding tweets from politicians praising the U.S. team for displaying great valor—after it had all gone down, there was Tim Howard, the American stopper who had made an incredible sixteen saves to keep the United States in the game, a feat of goalkeeping prowess with no equals in World Cup history.” New Yorker

World Cup Pass & Move: The Boys of Summer
“For the last two weeks, the United States men’s national team has had your neighbor talking about 4-3-3 formations, the lady on the bus wearing a Clint Dempsey–riding-Falkor T-shirt, and has probably been the reason dozens of babies will be named John Anthony in nine months. The American players helped inspire a palpable passion around the game in this country, unlike anything we’ve felt before. And they helped make this truly extraordinary World Cup one that none of us will ever forget. With the United States’s exit from the tournament at the hands of Belgium, a few Grantland writers — Brian Phillips, Chris Ryan, Mike L. Goodman, Noah Davis, Ryan O’Hanlon, and Bill Barnwell — wanted to take the opportunity to pay tribute to the players that gave us so much this summer.” Grantland

Wild Ride by U.S. Comes to End, but Soccer Is the Winner
“It felt as if Tim Howard would never go down. As if the United States would never go down, standing there, taking shots like an undersize fighter clinging desperately to a puncher’s chance. Howard saved with his hands. His feet. His legs. His knees. At one point, Howard even had a shot bounce off the crest over his heart. Trying to figure out where soccer fits into the fabric of America is a popular topic but, for one afternoon at least, there was this unexpected truth: All around the country, from coast to coast and through the nation’s belly, sports fans of every kind were inspired by the performance of a soccer goalkeeper. In a loss. The ending was cruel, but then so is the game.” NY Times

World Cup: USA dream shattered by Belgium
“No guts no glory, or so the saying goes. But perhaps the vanquished United States soccer team can rest in the knowledge that if the World Cup was decided on guts, it would surely be lifting the trophy in Brazil. For 120 minutes of Tuesday’s ultimately unsuccessful last-16 clash with Belgium, each one of Jurgen Klinsmann’s men left everything on the field in Salvador. From the second the Americans went 2-0 down in extra time thanks to goals from Kevin De Bruyne and Romelu Lukaku, the rearguard action started. Substitute Julian Green’s goal offered the nation a lifeline and energized its fatigued players with a quarter of an hour to play. And you could almost hear the sigh of despair from New York to Nevada as late chances for Jermaine Jones and Clint Dempsey were agonizingly spurned. The final whistle signaled tumult at either end of the emotional spectrum as Belgium advanced to a quarterfinal with Argentina on Saturday and the U.S. departed. Beaten, yes, but not bowed.” CNN

A Eulogy for the Most Intoxicating USMNT of all Time
“There was a point during the end of the Belgium game, when Lukaku roofed that second goal, and we could see the end was nigh, that I stopped being stressed out, and started to just feel proud. The score didn’t matter, I told myself. This team has given every last iota of whatever nutritional substance is fueling their bodies. I will be fine with whatever happens. And then—of course—Julian Green comes on and buries a volley in the Belgian net to create the most frenzied final six minutes in US soccer history.” New Republic

“The sight of young men in board shorts and flip-flops holding high-powered assault rifles is one you never get used to. A few weeks ago in one of Rio de Janeiro’s most violent favelas, half a dozen such young men were sitting on plastic chairs around a small TV set that had been brought onto the street. They drank beer and chain smoked bagulhos, fat conical joints. One guy wore a thick gold chain with two plastic baggies dangling off it, one filled with white powdered cocaine, the other crack. A couple of others, we noticed, accessorized with grenades strapped to their belts. Just a few miles away, thousands of fans from around the globe were gathering at Fan Fest on Copacabana Beach to watch the opening World Cup match between Brazil and Croatia.” Fusion (Video)

“Lionel Messi is often the smallest player on the field. But it is clear that he possesses his own gravitational pull. Just look at how opposing players — entire teams — drift toward him, one after another, and impulsively flinch at his every step and feint. Look at how magnetically he draws a crowd’s collective gaze, how hushed with expectation a building can become whenever he makes a run. Look at how quickly the ball zips its way back to his feet whenever his team feels the slightest bit of anxiety. Messi’s stature, already large, has grown considerably in this World Cup, and it grew somehow bigger still Tuesday as he inspired Argentina to a 1-0 victory over Switzerland at Arena Corinthians.” NY Times

The Dilemma of Broadcasts: Univision, ESPN, and the Radio
“For this bilingual World Cup enthusiast, the beginning of each game requires a decision: watch the broadcast in English on ESPN (or sometimes on ABC), or in Spanish on Univision. I thought at first that what would make me choose one over the other would be a momentary preference for the agitation and drama associated with the Spanish broadcast or the calmness and restraint of the English broadcast. But later I realized it wasn’t that simple, that my choice was governed by darker motives that had to do with memory and the radio. I realized that the difference between the two broadcasts has to do not only with the languages they use but also in their tolerances for silence.” New Republic

It’s Time for Argentines to Get Behind Their Team
“The Albiceleste won all three first round games, but that hasn’t kept its demanding supporters from complaining. From one Che to another: Shut up and enjoy the team! As Argentina readies for its second-round game against Switzerland, its fans are getting, well, tense. Is Argentina playing to its full potential? No, it is not. Is it the worst team at the World Cup? No, far from it. Yes, many of us have been frustrated by the performance of our team at this World Cup, despite its perfect record in the first round. Alejandro Sabella’s men have been static and even boring at times with neither Sergio Aguero nor Gonzalo Higuaín up to their usual standards.” Fusion

Argentine Fans Feel Right at Home
“Tens of thousands of soccer fans came from all parts of Argentina. It does not matter that there were no tickets left for the match. This seemed an irrelevance. The main thing was to have been here, and to have witnessed Argentina take on Switzerland. In a sliver of park overshadowed by the modern office buildings of downtown São Paulo, FIFA has installed large screens for those without tickets. The fans know that tickets were going for between $2,000 and $3,000. Not that there were any for sale. Those who had come from the Arena Corinthians complain that there are only buyers and no sellers. Even two hours before the match started, the Argentines appeared en masse with their flags of light blue and white. The stripped albiceleste shirts are ubiquitous; even children in strollers were wearing them. The drinking started early. One fan, while being frisked at the turnstile, shouted: ‘Today, we’re all brothers. Boca-River, it doesn’t matter.’ He was referring to the rival clubs River Plate and Boca Juniors.” NY Times

“Twenty minutes from the end of their opening game in the group stage of the World Cup, Belgium—Team U.S.A.’s upcoming round-of-sixteen opponent—was trailing the underdog Algeria, 1-0. But then the Belgian substitute midfielder Marouane Fellaini, hitherto remarkable only for his spectacular Afro, outjumped a defender and headed home the equalizer. ‘Big man … big stage … big hair … big goal … Belgium back in business.’ What would the World Cup be without these over-the-top grace notes from English commentators like Adrian Healey, who called the game for ESPN?” New Yorker

“The United States plays Belgium today in the round of sixteen, with the winner moving on to the quarterfinals of this 2014 World Cup. It’s an accomplishment the U.S. has only managed once before, in 2002, by beating Mexico, before losing a tightly contested match to Germany, the eventual tournament runners-up. Belgium has gone further—they arrived as far as the semifinals in 1986 before succumbing to two Diego Maradona goals and then losing to France 4-2 in extra time in the consolatory third-place game. That was an extraordinary Belgian side: Enzo Scifo, Eric Gerets, Jean-Marie Pfaff in goal, Jan Ceulemans. Since then, Belgium has fared no better in the World Cup than the U.S. has—three exits at this very same round of sixteen, one exit at the group stage, and, in 2006 and 2010, a failure even to qualify for the tournament. The U.S. hasn’t missed a World Cup since, coincidentally, 1986.” The Paris Review 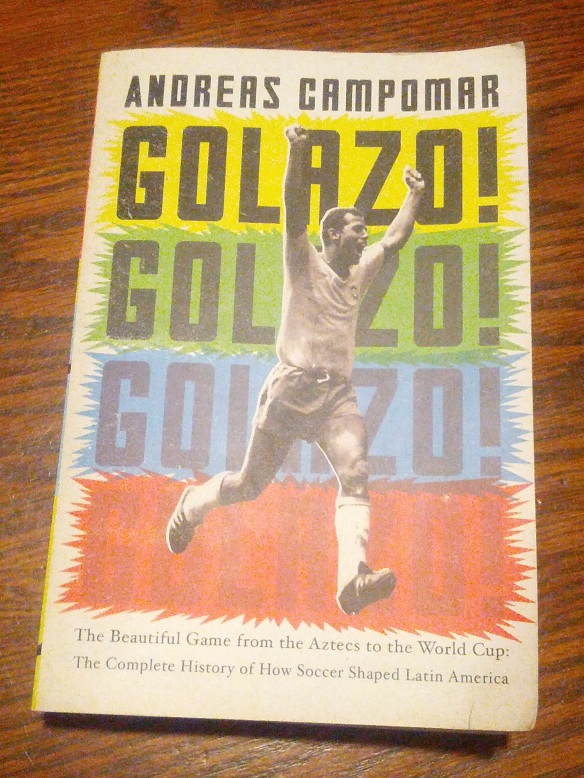 Golazo!: The Beautiful Game from the Aztecs to the World Cup: The Complete History of How Soccer Shaped Latin America by Andrea Campomar
“The world is divided into two groups of people: those who look forward to the World Cup every four years, and those who don’t realize they’re soccer fans until the World Cup starts. For the latter, those recent converts to the soccer religion, here is a reading list you’ll want to page through before the 2016 Summer Olympics in Brazil, so you too can become a soccer expert.” Fusion

A Definitive Reading Guide To The 2014 World Cup
“In Brilliant Orange, the English writer David Winner’s celebrated study of Dutch soccer culture, he quotes voetbal-loving artist Jeroen Henneman on the subject of the Brazilian game: ‘I was so disappointed when I went to Brazil,’ he tells Winner, describing his first trip to the country that will host this summer’s World Cup. ‘I’d thought: finally I will see the great Brazilian football! I expected to see a very ‘roomy’ football. But they play in the most boring way, on technique, only to show off… So slow! They go forward, they go back. Some do little tricks, nice little things. But it is not football.’ It is not football.” Huffingtonpost

“Was Luis Suárez’s bite of an opponent any more unethical than other forms of direct harm, such as a stomp or a professional foul in which the risk of serious injury is more likely? Or does the fact that biting is viewed as ‘uncivilized’ make it uniquely worse? JACK HIGGINS, posted on Facebook” NY Times

“‘I haven’t heard the halftime yet,’ said Obie, one of the many Nigeria supporters on hand for the Super Eagles’ watch party at the Nigerian comfort-food spot Buka. He motioned toward a projection of the currently level France-Nigeria match and the broadcasters breaking it down at halftime, albeit inaudibly. ‘We’re so loud.’ Noise is a good thing to keep in mind when thinking about Nigeria’s presence in the round of 16 — noisy in appearance because of its lime-green jerseys, noisy because of Africa’s waning presence in the World Cup and the rallying cries joining the Eagles, noisy because of the atrocities happening in the northern part of their home country.” Grantland