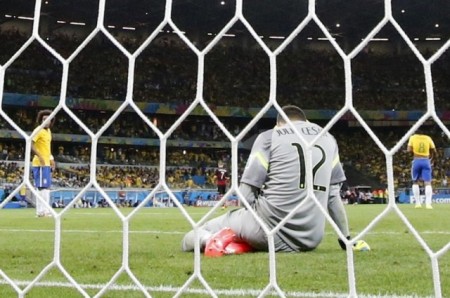 “In one of the most incredible matches in World Cup history, this ridiculous scoreline was an entirely fair reflection of Germany’s dominance. Jogi Low named an unchanged side from the XI that had narrowly defeated France in the quarter-final. Luiz Felipe Scolari was without the suspended Thiago Silva, and the injured Neymar. Dante was the obvious replacement at the back, while tricky winger Bernard was a surprise choice to replace Neymar, with Oscar moving inside to become the number ten. Luiz Gustavo returned after suspension, with Paulinho dropping out. Incredibly, this game was finished after half an hour – it was 5-0, and Brazil were simply trying to avoid further embarrassment.” Zonal Marking

Brazil 1 Germany 7
“Brazil’s World Cup dreams ended in humiliating and brutal fashion as Germany inflicted their heaviest defeat in the first semi-final in Belo Horizonte. A thunderous occasion that began with Brazil riding a tidal wave of emotion was reduced to a nightmare as Germany were 5-0 up inside 29 remarkable minutes in front of a disbelieving Estadio Mineirao crowd. Brazil’s players mourned the absence of the injured Neymar before kick-off, but captain Thiago Silva was an even bigger loss. The result was their first competitive home defeat in 39 years, and the end of their hopes of making it to the World Cup final at the iconic Maracana on Sunday.” BBC

Germany Scored Three Goals in 76 Seconds and Four Goals in Four Minutes
“Everyone, including Slate, has noted that Germany scored five goals in an 18-minute span on Tuesday. That figure, though, understates what the Germans accomplished. For a good portion of that 18 minutes, the ball wasn’t in play because it was sitting in the back of the net and Die Mannschaft was celebrating. The ESPN broadcast made it hard to determine how fast Germany had scored in actual game time, as the copious goal replays were always butting in to the on-field action. In order to get an accurate count, I rewatched the first half using ESPN’s ‘tactical cam’ replay, which shows the game from above and affords a clear view of each goal and the precise moment when play subsequently resumed.” Slate (Video)

Goal, Goal, Goal, Goal, Goal, Goal, Goal, and Brazil’s Day Goes Dark
“The fireworks began at dawn. All around this city, loud pops and bangs rang out as men and women and children, so many dressed in yellow, set off flares and beeped car horns. It was supposed to be a magical day. The Brazilian national soccer team, playing at home, was one game away from a World Cup final. No one could have guessed the tears would come before halftime. No one could have imagined there would be flags burning in the streets before dinner. Certainly no one could have envisioned that any Brazilian fans, watching their team play a semifinal in a celebrated stadium, would ever consider leaving long before full time.” NY Times

Let the Recriminations Begin in Brazil, and Let Them Begin with Scolari
“Then Brazil lost a relative squeaker to France in the finals of the 1998 World Cup, the country’s congress held intensive investigations and hauled some of its most storied athletes before a panel of preening politicians. Conspiracy theories swirled that cast blame in all directions—one widely held notion attributed the defeat to the machinations of Nike. The questions were irrational but give some hint of the mindset of a defeated Brazil and foreshadow the ugly recriminations that will follow this ugly defeat.” New Republic

Nation in Despair
“… Everyone knew it would be difficult for Brazil without the injured star Neymar and the suspended captain, Thiago Silva, but nobody imagined this feeble capitulation — four goals surrendered to Germany in six minutes during a 7-1 rout in a World Cup semifinal. Early on, Brazil’s players bickered, lost their cool, then lost their fight. The country of the beautiful game was left to face a grotesque humiliation. Luiz Felipe Scolari, the coach, flung his hands in disgust amid the flurry of early German goals. Marcelo, a defender, put his hands to his face in embarrassment and disbelief. A boy and a woman cried in the grandstand beneath their glasses, appearing stunned and overcome on camera.” NY Times (Video)

Is Arjen Robben a Jerk, or Does He Just Suffer From Jerk Face Syndrome?

“Name: Arjen Robben Home country: Netherlands Known for: Cutting inside and shooting with his left foot, diving, apologizing for diving, diving after apologizing for diving, promising not to dive again, diving after promising not to dive again, inspiring memes, Jerk Face. Why he might be a jerk: He looks like a pretty big jerk. The main manifestation of this jerkiness is the way his entire body explodes in apparent death throes every time he’s touched or nearly touched in the penalty area. His theatrics at the 2014 World Cup have set off this year’s version of the perennial hand-wringing over diving and whether it ruins soccer.” Slate (Video)

“After an episode in Peru earlier this year in which Peruvian soccer fans subjected a Brazilian player to racial abuse by imitating the sounds of monkeys, President Dilma Rousseff of Brazil swiftly pledged a ‘World Cup against racism,’ declaring, ‘Sports should be no place for prejudice.’ Yet when Brazil’s top player, Neymar, broke a vertebra when he was kneed in the back during a match on Friday by a Colombian player, the torrent of racist insults against the Colombian, Juan Camilo Zúñiga, showed how far the host of the World Cup remains from achieving that goal.” NY Times

An Argentine Army Grows in Brazil

“As the Albiceleste goes deeper into the tournament, its fan base gets bigger, louder, and even more unbearable to Brazilians. Until recently, the biggest fan mobilization in Brazilian soccer history arguably came on September 5, 1976, when 70,000 Corinthians fans travelled the 300 miles from São Paulo to the Maracanã in Rio de Janeiro to see their team beat Fluminense in the Brazilian championship playoffs. Twenty-eight years after the Invasão Corintiano, another fan invasion is making headlines in Brazil. There were an estimated 20,000 Argentinian fans at the Maracanã in Rio de Janeiro for Alejandro Sabella’s team’s opening game against Bosnia and Herzegovina, including 50 or so ticketless gatecrashers who jumped over a wall into the stadium. The number had swelled to 30,000 when Messi and co. reached Belo Horizonte for their second game against Iran, and 70,000 hermanos, as Brazilians call their neighbors,swarmed across the border into Rio Grande do Sul for Argentina’s final group stage game against Nigeria.” Fusion

“The first World Cup I remember was Spain ’82. I was eleven and in my fifth year of primary school and living at the Holy Child Teacher Training College, in Ikot Ekpene, in southern Nigeria, where my mother taught home economics. This is about an hour from my village. It was two years since I watched Nigeria’s Green Eagles (as they were called then) defeat Algeria to lift the African Cup of Nations for the first time, in 1980. I remember the three goals against the Desert Foxes, or Les Fennecs, by Segun (Mathematical) Odegbami and Muda Lawal and the celebrations that swept through the land. The image of our captain, Christian (Chairman) Chukwu, lifting the cup after the game was something to behold.” New Yorker