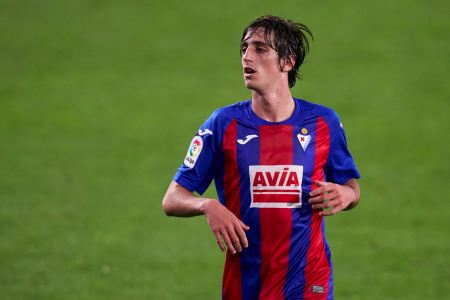 “The way the story is told at Sevilla, the first time Bryan Gil turned up at the club’s training ground, one November evening when he was 11, they put him up against the biggest, strongest, hardest kid they could find. That would show how good he really was. Tall and blond, they called the kid The Russian, after Dolph Lundgren’s character in Rocky IV. His name actually was Iván too, and although he was Leiva not Drago, from Málaga rather than Siberia, he was an intimidating figure. Bryan took him apart. Sevilla’s academy director, Pablo Blanco, recalls the story, returning later with a team picture, the two boys by then on the same side. There’s something in the legend: The Russian is twice the size of the rest. …”
Guardian
Bryan Gil (pronounced Hill) – Spurs’ new signing is fearless, direct and similar to Grealish
W – Bryan Gil

This entry was posted on Monday, August 9th, 2021 at 8:48 pm and is filed under Football Manager. You can follow any responses to this entry through the RSS 2.0 feed. You can leave a response, or trackback from your own site.