“Mauricio Roberto Pochettino Trossero (born 2 March 1972) is an Argentine professional football manager and former player who is the current head coach of Ligue 1 club Paris Saint-Germain. Pochettino played as a central defender and began his career in 1989 with Primera División club Newell’s Old Boys, winning a league title and finishing as runner-up in the 1992 Copa Libertadores. In 1994, at age 22, he transferred to newly-promoted La Liga club Espanyol, helping establish their top-flight status and won the 2000 Copa del Rey, their first trophy in 60 years. In 2001, he joined Ligue 1 club Paris Saint-Germain, and had a stint with Bordeaux, before returning to Espanyol in 2004, winning another Copa del Rey in 2006. He was capped 20 times for the Argentina national team and played at the 1999 Copa América and 2002 FIFA World Cup. …”
Wikipedia
W – List of Paris Saint-Germain F.C. managers

The Bizarre Stadium That BANKRUPTED 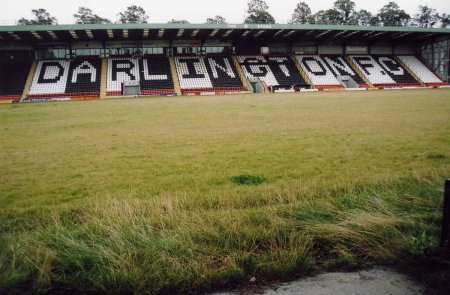 “In the late 1990s, a local kitchen worktop tycoon and multimillionaire named George Reynolds saved Darlington Football Club from extinction. Initially, he was hailed as a saviour, but within the space of just five years – Reynolds loaded the club with debt, made a series of high-profile transfer failures, and built a bizarre football stadium that was among England’s largest outside of the Premier League. So in this documentary, HITC Sevens takes a look back at the life of George Reynolds, the ridiculous 25,000 seater stadium that he built, and the legacy that both he and it have had on Darlington FC. …”
YouTube: The Bizarre Stadium That BANKRUPTED 38:03
W – Darlington F.C.
W – George Reynolds