“Gerard Piqué was 13 or 14 the day the Barcelona manager came to tea. When his grandfather proudly introduced him as the future Camp Nou centre-back, Louis van Gaal walked over and without a word pushed him to the floor. Standing over him, he looked down at this kid lying there and delivered a devastating verdict: you’re too weak to play for Barcelona. Twenty-one years, 567 games, eight leagues, eight cups and four European Cups later, a World Cup and a Euros too, he’s not just still standing; he’s carrying the club on his shoulders. Well, someone has to. …’
Guardian
Guardian: Barcelona lift post-Messi gloom with win over Real Sociedad
Five talking points from Barcelona 4-2 Real Sociedad (Audio) 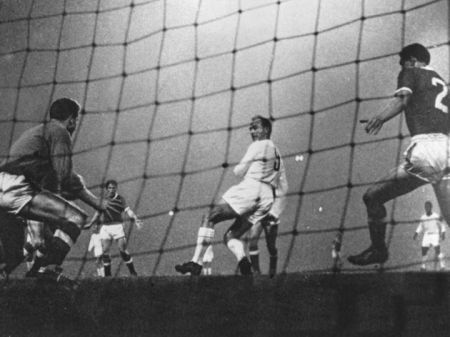 Alfredo Di Stéfano’s adventures in Colombia
“The Golden Age of football in Colombia had war, destruction and corruption, long before Pablo Escobar. Between 1949 and 1954, some of the world’s very best players congregated in a brand new league with no history, in Colombia. Tifo uncovers how a ‘pirate league’ attracted stars of the day (including Alfredo Di Stefano, World Cup winner Schubert Gambetta, and Manchester United’s Charlie Mitten), how an assassination of a presidential candidate launched the competition, and how the fallout changed a FIFA law forever. Written by Seb Stafford-Bloor, illustrated by Philippe Fenner.”
YouTube: The Athletic
‘The Only Thing That Unites Us’ – Origin Story of Colombian Football: Part 1, El Dorado – Origin Story of Colombian Football: Part 2
W – El Dorado (Colombian football), W – Alfredo Di Stéfano
NY Times: The Lessons of the Pirate League
Colombia: …and an overview of the El Dorado era (1949-1953).