Non-League Videos Of The Week: The Blue Square South 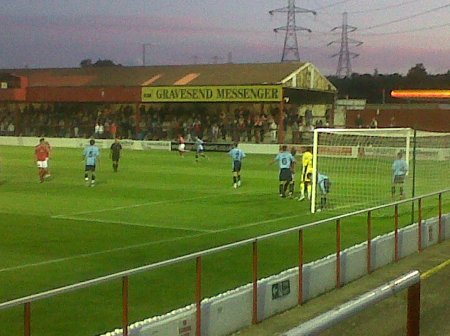 “Refreshed and reposed after a break for Christmas, we’re back this morning with a double dose of Non-League Videos Of The Week. We have a couple of matches from the Blue Square Premier coming up a little later this morning, but we are starting off with five of Boxing Day’s matches from the Blue Square South. Leaders Woking have pulled clear at the top of the table, and they attracted a crowd of over three thousand people for their match against Farnborough, but the chasing pack were also in action and we have derby matches between Chelmsford City and Thurrock, Bromley and Tonbridge Angels, Dover Athletic and Eastbourne Borough and Welling United and Dartford. As ever, our thanks go to those that record, edit and upload these matches.” twohundredpercent (Video)

Non-League Videos Of The Week: The Blue Square Premier
“For the second part of our Non-League Videos Of The Week, we have two matches from the Blue Square Bet Premier Division. At the top of the table, Wrexham are continuing to hold Fleetwood Town at bay and, while Fleetwood had a Lancashire derby match at home against third placed Southport on Boxing Day, Wrexham, who are now owned by their supporters, made the relatively short trip to Shropshire to play another supporter-owned team, AFC Telford United, and over four thousand people turned out at New Bucks Head for the match. Our second match comes from the other end of the division. Ebbsfleet United recently announced that they need to find £50,000 to plug a gap in their finances. They are just above the relegation places at present and can sure up their position with three points from a home match against Hayes & Yeading United. Our thanks go to those that take the time to record, edit and upload these videos.” twohundredpercent (Video)

This entry was posted on Friday, December 30th, 2011 at 8:40 pm and is filed under England. You can follow any responses to this entry through the RSS 2.0 feed. You can leave a response, or trackback from your own site.