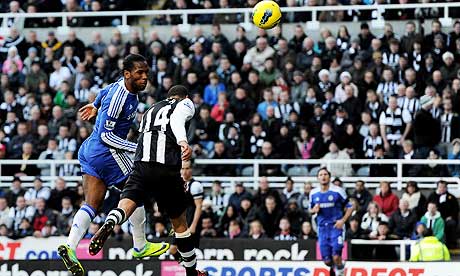 Didier Drogba
“The scoreline makes it look convincing, but Chelsea had to work extremely hard to get the three points. Alan Pardew was without the suspended Jonas Gutierrez and the injured Cheick Toite, so Peter Lovenkrands started on the left, and Danny Guthrie in the middle. Fabricio Coloccini only lasted half an hour before being replaced by James Perch.” Zonal Marking

Newcastle 0-3 Chelsea:The Scoreline Flatters Chelsea
“The scoreline doesn’t tell the whole story, as Chelsea were severely tested by Newcastle United for most of an entertaining game, before finishing them off with two goals in the dying minutes. The home team had the hard-working duo of Jonás Gutierrez and Cheick Tioté out, so Peter Løvenkrands and Danny Guthrie came in. Captain Fabricio Coloccini went off injured after just 28 minutes and was replaced by utility player James Perch. Chelsea started with Didier Drogba up front, while Oriol Romeu continued in the holding role after an impressive outing against Wolves.” The False 9

“As ever, with thedraw for the European Championship, the first thought is how many exciting ties there are in prospect in the group stage. Holland vs. Germany, Spain vs. Italy, France vs. England, Portugal’s games against the Dutch and the Germans … this is how tournament soccer ought to be; big games at every turn. The World Cup, ludicrously bloated as it now is, doesn’t offer that sense of immediacy, of giants clashing from the off, and the fear must be that as the euros expand to 24 teams from 2016, it too will be diminished by the grind of small sides packing their half and seeking to frustrate opponents.” SI – Jonathan Wilson

“2nd v 1st going into the game, but this draw allowed Bayern Munich to return to the top. Lucien Favre was without Marco Rues, so Raul Bobadilla played alongside Mike Hanke. At the back, Martin Stranzl returned from injury and was in for Roel Brouwers. Jurgen Klopp is still missing Sven Bender after he got injured against Arsenal, so Ilkay Gundogan played instead – otherwise, the side was as expected. This wasn’t a particularly tactical match – the sides played their usual systems, there were no major switches in formation, and the first substitute entered the pitch in the 77th minute.” Zonal Marking

“It may have seemed as if Ireland’s Euro 2012 dreams had suffered a hammer blow as they were thrown into a opening group featuring Spain, Italy and Croatia, yet the reaction in Dublin has been surprisingly upbeat as the gravity of the task facing Giovanni Trapattoni’s rank outsiders was digested.” ESPN

French fancy their chances
“It goes without saying French football owes a big debt of gratitude to Zinédine Zidane, from his headers to help win the World Cup to his silken contribution to the Euro 2000 success and even to his retribution-filled coup de boule – his ‘head-butt’ – on Marco Materazzi. Zizou added another reason for Les Bleus to be thankful to him when he produced another coup de boule – which could also mean ‘ball trick’, honestly, it works in French! – by drawing a clement Euro 2012 group for his old mate Laurent Blanc.” ESPN 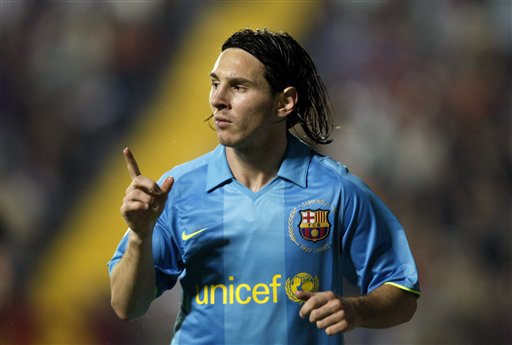 “Ever since Barcelona and Pep Guardiola invented football in 2009, the praise has come full and fast, a blue and purple tsunami of love for unparalleled genius. And it’s fair enough. Xavi is the best midfielder of his day, Andres Iniesta the most elegant, able to pass, trick and score with effortless beauty. The most extensive gush is reserved for Lionel Messi. A genius, apparently, but is he actually any good?” ESPN

“Faton Toski grabbed two goals and three assists as Bochum gave Aue a harsh lesson in the virtues of taking your chances. Despite the hosts bossing the ball in the opening 45 minutes of this Sunday afternoon 2. Bundesliga clash between two mid-table sides, Aue actually had more chances, but were profligate and up against Bochum’s impressive goalkeeper, Andreas Luthe. But, at the other end, Toski and Christoph Kramer helped tear Aue open, with Marcel Maltritz, Mirkan Aydın and Toski himself scoring the goals that gave coach Andreas Bergmann’s side a 3-0 lead at the break. The hosts added two more goals to their tally shortly after the restart, with Toski unplayable and Aue seemingly having thrown in the towel, before Aydın grabbed his second and Bochum’s sixth to cap a memorable day.” Defensive Midfielder

“Two of the Bundesliga’s best strikers made their mark as Hannover and Freiburg played out a 1-1 draw that keeps the latter in the relegation zone. For nearly 70 minutes, it had looked as though the class of Mohammed Abdellaoue was going to settle a not particularly memorable tie in the visitors’ favour. They were the better team in the first half, and took the lead through an own goal after great work by the Norwegian international.” Defensive Midfielder

“Southern League Premier Division side Stourbridge finally ended their greatest ever FA Cup run at the hands of League One Stevenage at the War Memorial Athletic Ground earlier today, thanks to two goals from Chris Beardsley and a late third from Robin Shroot.” twohundredpercent