“In 1924, Uruguay arrived as unknowns at the Olympic football tournament in Paris, took everyone apart on the way to winning the gold medal and changed football forever. The enthusiasm they set off led to the birth of the World Cup six years later. And like so many significant events in football, it was not just because they won – it was because of the way they did it. Contemporary accounts raved about them. Influential journalist Gabriel Hanot praised their ‘marvellous virtuosity in receiving the ball, controlling it and using it,’ and drew attention to their ‘beautiful football, elegant but at the same time varied, rapid, powerful, effective.” BBC – Tim Vickery

“European champions Barcelona thrashed South American champions Santos in the World Club Cup final in Yokohama. Pep Guardiola was without David Villa – and probably will be for the rest of the season – and Alexis Sanchez wasn’t considered fit enough to start. Therefore, Guardiola played ‘traditional’ midfield three and pushed Cesc Fabregas and Thiago Alcantara forward. Muricy Ramalho dropped Elano from the side that overcame Kashiwa Reysol in the semi-final, bringing in Leo instead. Barcelona were dominant from the first whistle to the last, enjoying an even larger spell of possession than expected, and could have won by more.” Zonal Marking

Messi leads Barcelona to 4-0 win over Santos and Club World Cup
“Lionel Messi struck twice as Barcelona overwhelmed Brazil’s Santos 4-0 on Sunday to win its second Club World Cup in three years. Messi, Xavi and Cesc Fabregas scored in the first half as the European champions won its 13th trophy under coach Pep Guardiola, solidifying its stature as the best club team in the world.” SI

“Liverpool boss Kenny Dalglish celebrated his first league win as a manager at Villa Park as first-half goals from Craig Bellamy and Martin Skrtel ensured a comfortable victory over Alex McLeish’s side. Bellamy and Skrtel struck inside the first 15 minutes to seal the Reds’ fifth away win in the Premier League this season, but the star of the show was striker Luis Suarez, who tormented the Villa defence and hit the bar and the post.” ESPN

Plaudits rain down on Luis Suarez after inspiring Liverpool FC to win over Aston Villa
“KENNY DALGLISH praised Luis Suarez after the striker ignored the ongoing delay over his FA charge by inspiring Liverpool to victory at Aston Villa. Suarez earned plaudits from both managers as the Anfield outfit secured their seventh win in their last eight away games with a 2-0 triumph over the Midlanders yesterday.” Liverpool Daily Post 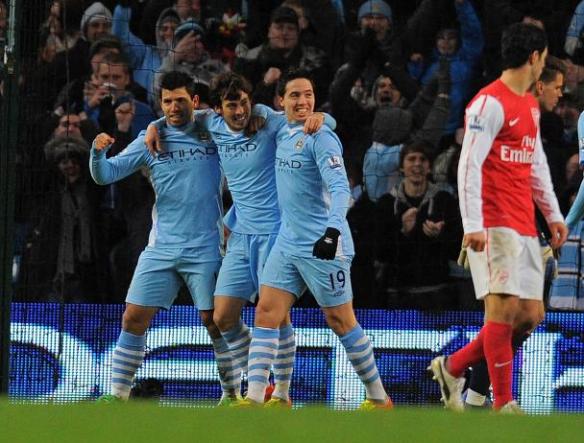 “David Silva scored the winner in a match that should have produced more goals. Roberto Mancini left out Edin Dzeko, which seems to be standard for big Premier League games. Gael Clichy was suspended so Pablo Zabaleta moved to the left with Micah Richards starting at right-back. Samir Nasri started in midfield over James Milner. Arsene Wenger was short of full-backs and named an unchanged side from the XI which beat Everton 1-0 last weekend. This was end-to-end and exciting – neither side ever had control of the game.” Zonal Marking

David Silva’s inside game creates tactical anarchy for Arsenal
“David Silva is quite a player, isn’t he? Shorn of many outstanding individuals, Silva has risen above the challengers to claim the crown as the Premier League’s top talent. But perhaps, therein lies the question. Manchester City-Arsenal was a great advert for the league, argues Michael Cox for ZonalMarking.net – it was played at a pulsating pace, full of trickery and cunning and not to mention great technical ability – but it lacked a certain control the best European counterparts, Real Madrid, Bayern Munich and FC Barcelona, are masters at. Indeed, is it that the hectic nature owes in part, to the failure of English sides in the Champions League and thus the extra space allowing David Silva to become the best in the league?” Arsenal Column

City deal blow to resurgent Gunners
“Exit Arsenal. A title challenge that appeared to have ended in ignominy on their last trip to Manchester is all but over after their return. But a departure in December, rather than during their awful August – and following an unfortunate 1-0 defeat, rather than the historic humiliation of an 8-2 thrashing – means they can take their leave rather more respectably. Another piece of silverware is set to elude them but, after seven wins and a draw in the eight preceding games, pride has been restored.” ESPN

“One of the most interesting developments of the Premier League so far this season has been the strategy of Andre Villas-Boas. He took over on the back of a highly successful season at Porto where he had a very specific way of playing. He tried to recreate that at Chelsea and did so with some success, though he also encountered problems with his defensive line, particularly in the defeat to Arsenal.” Zonal Marking

“L’Aquila, August 2006: The city, an hour-and-a-half drive from Rome, like many others around Italy was still buzzing from the recent World Cup triumph. Piazza Duomo, the central spot in the city, was packed with locals and tourists alike soaking in the atmosphere and aesthetic charm of the surrounds, just as I was doing. The Santa Maria del Suffragio Church, with its lovely dome from which the piazza takes its name, stood above the rest. On the football pitch, L’Aquila was preparing for another season in the regional divisions.” In Bed With Maradona