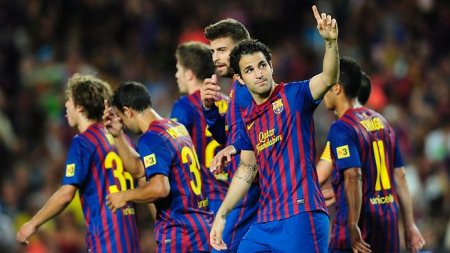 “Cesc Fabregas scored a brilliant volley to keep Barcelona’s non-stop victory parade going with a UEFA Super Cup triumph over Porto. Fabregas, on the bench until the last 10 minutes, took Lionel Messi’s pass on his chest before rifling home to spark scenes of wild celebration from his team-mates.” ESPN

Guardiola ends the European Super Cup final with six central midfielders
“Usually ZM looks at sides’ starting line-ups for matches, before assessing how the shape changed as the game went on. This is slightly different, however, because the interesting thing about Barcelona’s Super Cup win over Porto on Friday was the way they finished the game, with six central midfielders amongst the ten outfield players.” Zonal Marking

“Champions League draw. All eyes were on Monaco yesterday as the draw for the group stages of the UEFA Champions League took place. The annual ritual whereby Europe’s elite discover the identity of the fodder they will consume throughout the autumn months, has long since lost its lustre. However, big spending Manchester City ‘s entry into the competition for the first time, did at least offer the unusual prospect of one or two interesting group matches.” World Soccer (Video)

“Manchester City produced an excellent performance to maintain their 100% start to the season. Harry Redknapp was forced to use Niko Kranjcar and Luka Modric in the centre of midfield, whilst Peter Crouch got a start upfront. Roberto Mancini gave Samir Nasri his debut in place of James Milner, whilst Nigel de Jong missed out through injury. City were better in every department throughout this game.” Zonal Marking

Tottenham 1 – 5 Man City
“Edin Dzeko scored four times as he and debutant Samir Nasri helped Manchester City put Tottenham to the sword with a ruthless display of attacking football that secured a 5-1 win at White Hart Lane. Nasri supplied the crosses for Dzeko to score his first two goals and he also played his part in the run-up to Sergio Aguero’s strike, which made it 4-0 with half an hour to go.” ESPN

“Jordan Henderson and Charlie Adam scored their first Liverpool goals as the Reds crushed Bolton 3-1 to move top of the Premier League. The summer signings struck either side of a powerful Martin Skrtel header as the hosts, inspired by the outstanding Luis Suarez, produced an electrifying performance at Anfield.” ESPN

Liverpool 3-1 Bolton
“Fluid attacking, solid defending, intense pressuring and high-scoring. It was a sublime performance from Liverpool. Kelly’s injury and Klasnic’s late consolation goal for Bolton were slight annoyance’s in an otherwise perfect day. Suarez was up to his usual mischief, running Bolton’s defenders ragged and creating some great chances. The beautiful cross with the outside of his foot eventually lead to Henderson’s first Liverpool goal, which was expertly finished.” Joshua Kearney

1990s Month: CIS and the Transformation of Eastern Europe

“The Commonwealth of Independent States came into existence as a direct result of the break up of the Soviet Union and the consequent state of confusion that such a grand occasion caused. When the newly appointed leaders of Russia, Ukraine and Belarus convened to discuss where the newly sovereign nations of eastern Europe should turn next, the idea of an alliance between them began to take shape.” The Equaliser