“In early September, a theatre in Glasgow will host a production which focuses on the life of a former footballer who most of the audience will never have seen play. Their knowledge of John Thomson will have been gleaned from the occasional grainy piece of newsreel, anecdotes passed down through the generations, and media articles – they all tell the tale of a young man whose life was tragically cut short due to his bravery on the football field.” In Bed With Maradona

“And so the new Serie A season is upon us. Or rather it isn’t. After the league’s owners and its players failed to reach an agreement, it was confirmed on Friday morning that the scheduled first weekend of the season will be lost to strike action. How far things could go is anybody’s guess.” Guardian

Has the sun finally set on Javier Zanetti?

“Has Javier Zanetti’s international career finally come to an end? New Argentina coach Alejandro Sabella paid tribute to him last week – and then left him out of the squad to face Venezuela and Nigeria. He has forced his way back before after being dropped but at the age of 38 can he really come back again?” BBC – Tim Vickery

Behind the Curtain: Travels in Eastern European Football 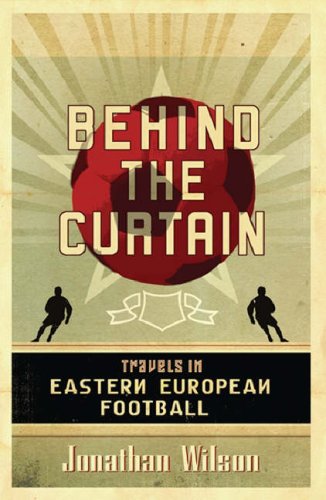 “From the war-ravaged streets of Sarajevo, where turning up for training involved dodging snipers’ bullets, to the crumbling splendor of Budapest’s Bozsik Stadium, where the likes of Puskas and Kocsis masterminded the fall of England, the landscape of Eastern Europe has changed immeasurably since the fall of communism. Jonathan Wilson has traveled extensively behind the old Iron Curtain, viewing life beyond the fall of the Berlin Wall through the lens of soccer. Where once the state-controlled teams of the Eastern bloc passed their way with crisp efficiency—a sort of communist version of total soccer—to considerable success on the European and international stages, today the beautiful game in the East has been opened up to the free market, and throughout the region a sense of chaos pervades.” amazon

Dirk Kuyt – Right for the Right?

“We all love the player that scores and gets assists. Those guys whose moments of genius at the end of an attacking move directly create the goals that get our teams to glory. And why not? The professionals, however – the coaches, the directors, the scouts, and so on – are capable of seeing things outside the box. Or, rather, inside the box. The large technical box of cogs and gears which power the team and allow those creative players to shine.” Tomkins Times

“Hannover returned to the top of the Bundesliga table after drawing 1-1 with Hertha Berlin, but the Lower Saxony side will feel aggrieved that they dropped two points after referee Robert Hartmann ruled out a late winner. Negative Hertha deserved to go in at the interval 1-0 down, although Hannover lacked the creative spark that would have seen them put more goals past their lacklustre opponents in the opening 45 minutes. The visitors changed systems three times during a rejuvenated second half performance, and despite still not looking overly convincing, they did start to create chances thanks to a more positive mentality against a home side who tired after Thursday night’s 2-1 win over Sevilla in the Europa League.” Defensive Midfielder

The Under-20 World Cup: A Football League Perspective

“In June, Ben Piggott ran the rule over the fortunes of Football League players in that month’s European Under-21 Championship, with Aron Gunnarsson and Mikkel Andersen in particular enjoying less than fruitful campaigns. Now, the man behind the illustrations that adorn this website turns his attention to the recent Under-20 World Cup, a tournanment that has been covered expertly by Two Hundred Percent and ended up with a somewhat Lusophone finale…” thetwounfortunates