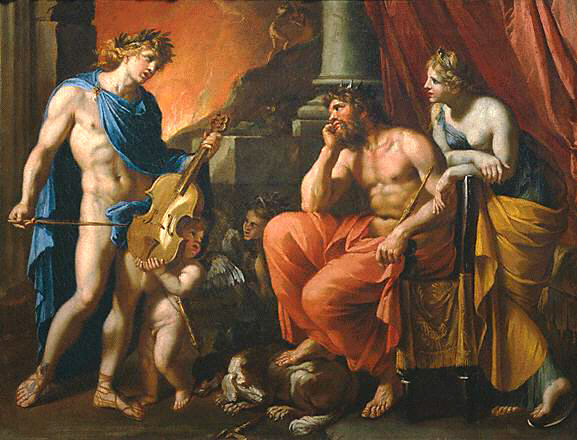 Francois Perrier, Orphée devant Pluton et Proserpine
“Manchester United have already demonstrated this season that they are capable of overwhelming teams despite fielding what on first glance appears to be a conservative 4-5-1 formation, notably in the 3-1 Carling Cup semi-final victory over Manchester City in January. They were at it again in the 4-0 win against Milan last week, when a side fighting hard for the Serie A title were simply torn apart by a United team fielding only one dedicated attacking player in the form of Wayne Rooney.” (Football Further)

“Quick—who’s the best goal scorer in Europe right now? If you answered Wayne Rooney, Lionel Messi or Didier Drogba, think again. Those three players top the standings in the race for the European Golden Shoe, given annually to the leading scorer in Europe, but according to an analysis by The Wall Street Journal, the continent’s most dangerous finisher is actually plying his trade for an unfashionable Italian team currently fighting relegation from Serie A. Step forward, Udinese striker Antonio Di Natale.” (WSJ)

“A few weeks ago, following our piece on Man City’s innovative online work, I was tipped off to a website in beta being built by Sheffield Wednesday’s web team that is one of a kind as an official club production in England: a social networking site that gives fans a forum, the ability to blog, upload photos and videos, make ‘friends’ and create groups. Unlike Manchester City’s expensive effort, this was built by a Championship club at a much smaller cost, and is an interesting experiment in how clubs can use social media to reach out to fans and build community online.” (Pitch Invasion)

“Lionel Messi staged another masterclass to power holders Barcelona into the quarter-finals of the Champions League at the expense of Stuttgart. Messi struck a brilliant opener after just 12 minutes to put Barca on track, and then played a key role as Pedro Rodriguez made it 2-0 soon after as the Catalan giants built a 3-1 aggregate lead.” (ESPN)

Messi happy to help those in need
“A man who torments opposing defenders is equally adept at helping children in need. FC Barcelona’s Lionel Messi, as part of the UEFA.com users’ Team of the Year 2009, received a cheque for €100,000 from the adviser to the UEFA president, William Gaillard, before last night’s UEFA Champions League first knockout round second-leg encounter with VfB Stuttgart at Camp Nou – before going to on to score twice in an outstanding display as Barcelona charged into the quarter-finals.” (UEFA)

Forget Rooney, magical Messi is the world’s best
“The famously insular world of English football has been quick to crown Wayne Rooney as the best player in the world in recent weeks – unsurprisingly perhaps in a World Cup year – but in Barcelona on Wednesday night, Lionel Messi demonstrated exactly why those claims ring hollow with a masterful performance in a 4-0 rout of Stuttgart.” (ESPN)

“With eight games to go (9 in Chelsea’s case) and this being the closest league finish in many many years, it presents endless opportunities for the dreamer in me to fantasize – a la that Kurosawa classic, Rashomon. Presenting two of such tales with four crucial fixtures (chapters) taken as the crux.” (BigFourZa!)

“Six weeks ago, Oliver Kay joined us ahead of the onset of UEFA Champions League’s Round of 16, venturing a prediction that the English Premier League teams would find this year’s tournament rougher than those of the preceding seasons. Today, Oliver joined me to reflect on the knock-out round performances of Manchester United, Arsenal, and Chelsea. Also, we look forward to this Sunday’s match between Manchester United and Liverpool and ask what Liverpool needs to go to maintain their string of good performances over Alex Ferguson’s side.” (EPL Talk)

“Everyone knows footballers live a life less ordinary, but Brian Laudrup must be in a select band of one to have personal experience of the inside of a car boot after being whisked away from the clutches of irate Fiorentina fans. ‘It was a complete nightmare,’ Laudrup told Soccernet of his first season of calico, the topsy-turvy 1992-93 campaign which saw La Viola metamorphose from title pretenders to relegation fodder. ‘The fans were so disappointed. I don’t think they wanted to beat us up, but it was a very hostile atmosphere. Cars were set alight, armed police on the streets, so it was quite hectic’.” (ESPN)