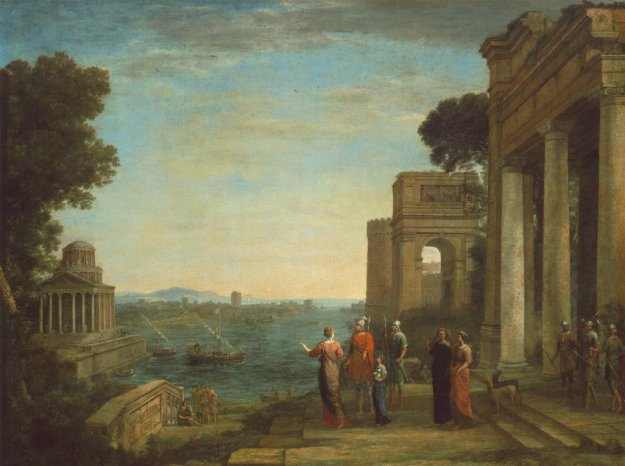 Claude Gellée, Les adieux d’Énée et Didon à Carthage (1676)
“A scintillating first-half performance set the tone for a one-sided Liverpool victory over Sunderland at Anfield that kept the Reds in the race for Champions League qualification. Fernando Torres struck a brilliant opener in the third minute and Glen Johnson’s deflected strike made it 2-0 at the end of a first half in which the hosts could easily have scored six.” (ESPN)

Liverpool 3 Sunderland 0: match report
“Springtime, and the shackles are off. Two goals from Fernando Torres, a fortuitous strike from Glen Johnson and a performance full of verve and panache gave a free-styling, freewheeling Liverpool, for so long laboured and unlovable, victory over Sunderland and cast Rafael Benitez’s side back into the thick of the race for the Champions League.” (Telegraph)

Fernando Torres’s touches of genius reignite the Liverpool challenge
“Fernando Torres struck a majestic goal as Liverpool announced their intention to chase Tottenham Hotspur all the way for a Champions League qualification place in emphatic style against Sunderland this afternoon. Their display was so commanding it allowed Anfield to mock the moment that had threatened to encapsulate their turbulent campaign.” (Guardian)

Liverpool v Sunderland – as it happened
“Kick-off is at 4pm. Sixth-placed Liverpool have won their last seven at Anfield and need to keep winning if they’re to maintain their push for fourth in the table and the place in the Champions League qualifying rounds that goes with it.” (Guardian)

Liverpool 3 – 0 Sunderland
“Torres opened the scoring with a spectacular strike in only the third minute, cutting inside Michael Turner and curling a shot into the top corner. Glen Johnson added a second with a shot that deflected off Turner then turned provider for Torres to hook home again. Craig Gordon saved well from Daniel Agger and Maxi Rodriguez to maintain some respectability for Sunderland.” (BBC)

Liverpool 3-0 Sunderland – Recap and Video Highlights – English Premier League – Sunday, March 28, 2010
“Liverpool hosted Sunderland in the English Premier League on Sunday, March 28, 2010 needing a win to keep their Champions League hopes alive. They are several points back of Tottenham Hotspur (who are in 4th place) and realistically need to win almost all of their remaining matches to have a chance at 4th place. Sunderland are above the relegation zone and need another win or two to guarantee their survival.” (The 90th Minute)

“There’s a case for saying that was the first huge game of the season. Title favourites Inter against the side who look most likely to topple them, and Jose Mourinho up against Claudio Ranieri – the man he replaced at Chelsea almost six years ago. It was an incredibly tight game with few goalscoring opportunities, and the goals were hardly well-crafted – Roma went ahead from a goalkeeping error at a set-piece, Inter equalised thanks to a couple of ricochets and an offside flag that never came, whilst Roma’s winner came thanks to a Taddei shot which found its way to Toni, who coolly converted. To add to this, Inter hit the woodwork three times, suggesting that this was a game that down to small details within the box, rather than because of a grand tactical plan.” (Zonal Marking)

AS Roma vs. Inter Milan
(footytube)

Roger Milla Cameroon 1990
“Last week, we took you from the beginning of the 1966 World Cup finals through to 1978 through the lens of the television cameras that brought the world’s biggest football tournament into our living rooms. This week we move on to the 1980s and the beginning of the gradual expansion of the tournament. The 1980s were a decade during which technological improvements that those in the television industry may have hoped for were cut short by a tournament that twice might not even have taken place, and ended with a tournament that was resplendent with bells and whistles but was let down by the appalling quality of football taking place on the pitch.”  (twohundredpercent)

“As Europe’s soccer season approaches the time for prizes or brickbats, the Bayern Munich coach, Louis van Gaal, declares: ‘These are the weeks of truth. We’ll either get the gladiolas or we’ll be dead.’ Never the shrinking violet, Van Gaal might soon live to regret his rhetoric.” (NYT)

“Barcelona provisionally moved back to the top of the Primera Division standings by becoming only the second team to take points off Real Mallorca at their Ono Estadi this season – with a 1-0 win. Zlatan Ibrahimovic’s 63rd-minute strike – his third of the week – proved to be the winner as Barca edged three points clear of Real Madrid, who play Atletico on Sunday night.” (ESPN)

Injured Iniesta to miss date with Arsenal
“Barcelona midfielder Andres Iniesta has been ruled out of Wednesday’s Champions League match with Arsenal due to a hamstring injury. The Spain international was replaced just after half-time in Saturday night’s win over Real Mallorca and, after undergoing tests, it was announced that he is likely to be sidelined for around 10 days.” (ESPN)