Doctor Battles to End Warfare on the Field

Iraq, Sept. 18, 2008
” ‘If you come to Bruges,’ said the Belgian doctor, ‘I have something to show you that will make your spine run cold.’ In Bruges, he handed over a video that he, the senior medical officer for a game played by 260 million people around the world, has put together. It is a catalogue of fouls of such ferocity, such crude intent to harm, that do indeed numb the senses. Dr. Michel d’Hooghe said nothing. He watched his visitor as the video ran. A foul in the Newell’s Old Boys versus Rosario Central derby in Argentina, in which the boot was raised deliberately into the head of an opponent at fearsome speed. A foul by a Glasgow Celtic player who landed one boot on the neck of a fallen opponent, and at the same time the other boot on his victim’s ankle.” (NYT)

“For almost 60 years, Lyon have been playing in the Stade de Gerland, a venerable old stadium built in 1914 and a World Cup finals venue in 1998. But their recent run of success of eight consecutive championships from 2002 to 2008 has Lyon planning a rich new future at the Grand Stade in eastern Lyon.” (Pitch Invasion)

Beckham’s on his way to Milan… and the World Cup 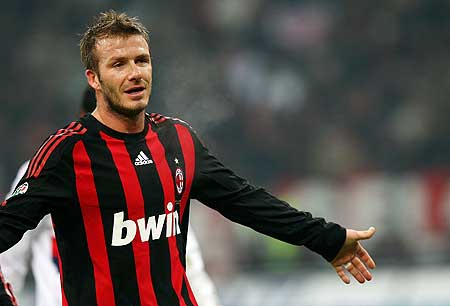 “So AC Milan chief executive Adriano Galliani has assured the world that the loan deal to take David Beckham back to the red half of the San Siro in January is ‘100% done’ and ‘The only thing missing is the signatures’ which simultaneously confirms that he’s lying (let’s face it, unless it’s signed and sealed, it isn’t 100% done) and that David Beckham will almost certainly be part of England’s World Cup squad in South Africa next year.” (They Think Its All Over)

“Crisis over at Anfield, then. Blimey, even David Ngog scored. Maybe it is because of such miracles that all the sensible advice from pundits about how “just one win” wouldn’t alter Liverpool’s dire on and off-field straits has gone through the defenestration process. Liverpool were almost everything against United that they weren’t against either Sunderland or Olympique Lyonnais. They were committed, organised and, most significantly of all, with Fernando Torres up front. Manchester United, however, were terrible.” (twohundredpercent)

Diego Maradona must learn to channel his emotions

“When Diego Maradona was appointed national coach, many in Argentina felt his mere presence on the bench would be enough to drive the players to new heights. All went well until his fourth match in charge, when a 6-1 defeat in Bolivia proved that motivational slogans were no substitute for effective planning for playing at altitude.” (WorldSoccer)

Managers who stoically shrug in the face of fate

“Post-match interviews with players are mostly dull because reporters only want to talk to the goalscorers, during which we learn that the player concerned is indeed quite happy to have successfully done his job. Managers, though, are interviewed as a matter of course, regardless of the game’s outcome. Again, not so interesting when the manager’s side has won but much more compelling after a defeat or a lost lead. A glance at this past weekend’s quotations presents an instructive picture of the several different ways of talking away failure.” (WSC)