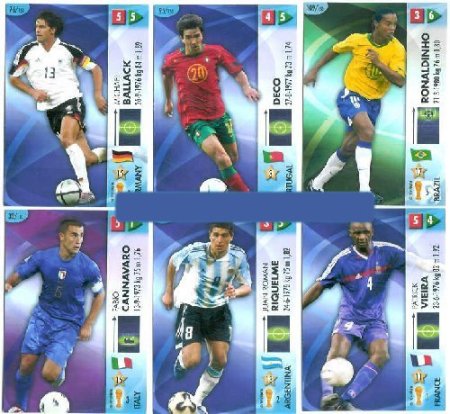 “Europe, the competitive and financial capital of soccer (and some say the spiritual heart) earns more than twice as many spots in the FIFA World Cup as any other continental region. Fifty-three teams compete for 13 spots, nine of which have been decided. The final four spots will be contested in a home-and-away playoff next month with France, Portugal, Russia and Greece receiving the benefit of ‘seeding’.” (NYT)

Do managers who are not white get a raw deal in the English game?

“Every time John Barnes loses his job, the chorus swells: do managers who are not white get a raw deal in the English game? To me the answer is straightforward. Because we have no way of knowing, there is no point in asking. And I find the subject an especially irksome waste of time and energy because it does not matter if we have 92 white managers or none. There is nothing better in English football than the disregard for racial origin that has formed over the past quarter of a century, since bananas were thrown at Barnes.” (TimesOnline)

Should supporters be involved in running their own clubs?

“When a conference on supporter involvement in English football includes speakers from Barcelona, UEFA, the F.A. and non-league football clubs, you know something unusual is going on. This isn’t the Leaders in Football conference of a couple of weeks ago, but it might have been just as important: Supporters Direct’s annual conference concluded last week in Birmingham, and it seems to have cut to the heart of the question of how and why supporters should be involved in the governance of their clubs.” (Pitch Invasion)

The Netherlands: 2009-10 Eredivisie, with 08/09 average attendances, and stadium photos.

“The reigning Eredivisie champions are AZ . The club is located in Alkmaar, Nord-Holland, which is 33 km. (20 mi.) north-west of Amsterdam. KNVB Cup (Dutch Cup) Holders are SC Heerenveen, from Heerenveen, Friesland. At the top of the map are the crests of each club, sized to reflect their 2008-09 average attendance in either the Eredivisie or the second division, which is called the Eerste Divisie. At the top left, there is a list of the cities with 09/10 Eredivisie representation. Below is the list I used.” (billsportsmaps)

“As participants in the first ever international football match there have been some glory nights for our Tartan cousins down the years. They’ve never progressed beyond the group stages of a major tournament, but in reaching every World Cup between 1974 and 1990 and always raising the game when the Auld Enemy hove into view, they have traditionally punched above their weight internationally (yes, we know, pre-Bertie).” (midfielddynamo)

“Last week, Creteil Bebel, an amateur French team, refused to play a league match against Paris Foot Gay – citing a range of reasons, all homophobic. They have since agreed to take the field against PFG, after they were threatened with being banned from the league and made national headlines in France as the homophobic Muslim team (the manager cited the fact that players on his team were ‘practicing Muslims’ to explain the refusal).” (From A Left Wing)

Lessons to learn for Colombia & Ecuador

“World Cup qualification in South America came to a close with only one change from the previous two campaigns. Brazil, Paraguay and, in the end, Argentina made it through once again, while Uruguay claimed fifth spot, the play-off position, for the third time running. The sole modification is that Chile have qualified instead of Ecuador.” (BBC – Tim Vickery)

Is it now or never for England?

“Team Limey was basking in an unfamiliar relaxed state leading up to this week’s final round of World Cup qualifiers, as its beloved England team safely qualified at the beginning of September with two games to spare. That marked a drastic change from some of the nail-biting, angst-ridden, stress-inducing recent qualification (or lack of) experiences. Two of many that spring to mind are the “Wally with the Brolly” on the touch line as we failed miserably against Croatia in qualification for Euro 2008, and David Beckham’s free-kick heroics against Greece that sneaked us into Japan/Korea 2002.” (SI)