The forgotten story of … Danish Dynamite, the Denmark side of the mid-80s

“Winning is for losers. Many of life’s more interesting stories focus on those who didn’t quite make it; who didn’t get the girl or the job or the epiphany or even the Jules Rimet trophy. Johan Cruyff said his Holland side of the 70s were immortalised by their failure to win the World Cup and, when World Soccer invited a group of experts to select the greatest teams of all time a couple of years ago, three of the top five sides won nothing: Hungary 1953, Holland 1974 and Brazil 1982. Lying 16th on the list – above any side from Argentina, Spain, Germany, Liverpool, Manchester United or Internazionale – was the Danish team of the mid-80s.” (Guardian)

The Art of the Apology, Part I

“As all married men out there know, apologizing is a bit of an art form. As the Harvard Business School points out: ‘Done right, an apology can enhance both reputations and relationships. Done wrong, an apology can compound the original mistake, sometimes to disastrous consequences.’ Which brings us to our first apology of the day: Sir Alex Ferguson’s apology to referee Alan Wiley.” (Avoiding the Drop), (Avoiding the Drop – The Art of the Apology, Part II)

“In the 1970´s, a simmering movement left the film industry perplexed and forever changed. The concept was simple: black pride. Yet from this basic concept sprang a world of parody, action, and humor. The era´s name? Blaxploitation. The US National team has similarly entered a new era of early goals but late comebacks, known simply as Bradleyextrapolation. The US went down 1-0, but a 3 goal explosion and a missed penalty resulted in an away victory and a ticket to South Africa. And now, the carefully calculated player grades.” (futfanatico) 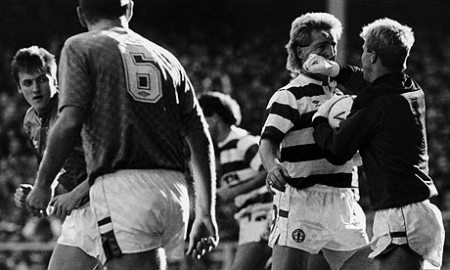 “Yet again the issue of The Old Firm moving to the English league has raised it’s rather gnarled and ugly head. I am torn on the issue – that is I can see both sides. That said, Paul Hayward in the Observer lays out five questions. I attempt to answer them below.” (Left Back In The Changing Room)

“In the latest Football Weekly, internet sensation James Richardson is joined by Sean Ingle, Barry Glendenning and Jonathan Wilson to look back on – let’s be honest – a surprisingly dramatic weekend of World Cup qualifiers. We kick off with England’s defeat in Ukraine. Is it time to bed in an alternative to Rio Ferdinand at the back? Did David James do enough to cement his position as the country’s top goalkeeper? And who’ll lead the line against Belarus in the absence of Wayne Rooney?” (Guardian)

Hit with the Ugly Stick – the Ugliest Footballers Ever

“Yes, it may be childish, it may even be downright mean, but what the hell, here are the best of your nominations for the game’s ugliest characters and your reasons for their inclusion… ” (midfielddynamo)