World Cup 2022 qualification: Who will be in Qatar and who is in play-offs? 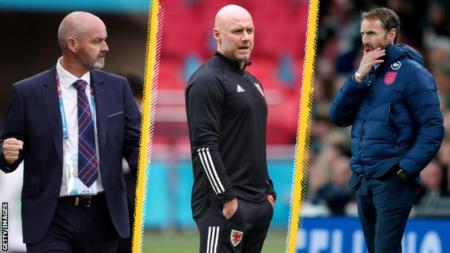 Gareth Southgate’s England are heading to Qatar 2022, while Wales and Scotland have a play-off place secured
“England have qualified for the 2022 World Cup finals while Wales and Scotland are heading to the play-offs along with some surprising names. European champions Italy and Portugal will also have to go through two rounds of play-off games next March after failing to win their respective groups. Heading to the World Cup so far are: Belgium, Croatia, Denmark, England, France, Germany, Serbia, Spain, Switzerland. The Netherlands, Norway and Turkey are the three teams left who can still qualify automatically. The winners of each group secure a place at the World Cup, with the 10 runners-up joining two Nations League teams in the play-offs, where three further places are up for grabs. …”
BBC

“The Jupiler Pro League (Belgian first division A) has largely been dominated in recent years by just a handful of teams. You would have to go back to 1997 to find a champion whose name isn’t Club Brugge, Gent, Genk, Anderlecht, or Standard Liege. If you travel all the way back to 1935, you enter an era dominated by Royale Union Saint-Gilloise. USG won three titles between 1932 and 1935, and after hibernating for over 70 years, they are back at the top of the table. Only promoted last season, they currently lead perennial champions Club Brugge by 4 points. … Many interesting dives into the rise, fall, and resurrection of the club under Brighton chairman Tony Bloom have been written. Few though have studied the tactical setup of USG though, and how manager Felice Mazzu has swept aside the heavyweights of the Benelux. There’s a wholesome uniqueness about the attack, and a riskier edge to their defence. …”
Breaking The Lines 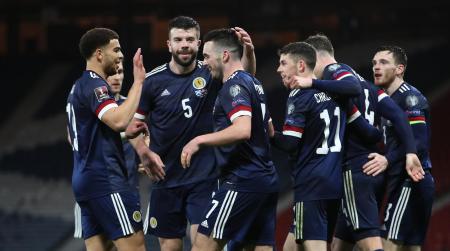 “Scotland secured a seeded spot in the World Cup play-off semi-finals as goals from John Souttar and Che Adams stunned Denmark with a thrilling performance at Hampden Park. Steve Clarke’s Group F runners-up needed at least a point against the runaway leaders to give themselves a chance of a home draw. But centre-half Souttar headed home in his first Scotland game since being sent off in a 2018 defeat by Israel and striker Adams burst clear to settle growing nerves after 86 minutes. Scotland had lived dangerously in the closing stages before that breakaway goal secured a sixth competitive victory in succession for the first time since winning six Home Nations matches in a row between March 1928 and February 1930. …”
BBC
Guardian: Che Adams secures Scotland play-off seeding in superb win over Denmark