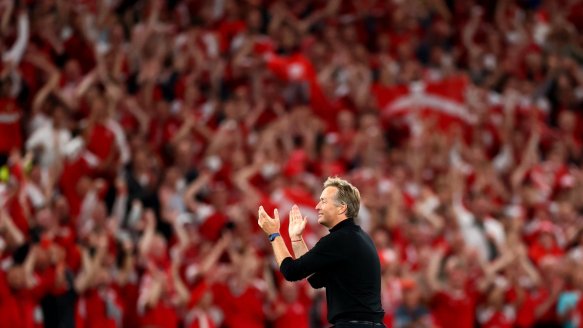 “With eight wins from eight, 27 goals scored and zero conceded, Denmark qualified for the FIFA World Cup Qatar 2022™ in stunning, swashbuckling style. But when Politiken, one of the country’s daily newspapers, dubbed 2021 an ‘almost perfect year’, the reason for qualifying the description was obvious. The events of 12 June, and Christian Eriksen’s horrifying on-field cardiac arrest, are never far from Danish minds – or from conversations around their team. Rather than cast a shadow, however, the trauma of the Eriksen incident – and the response to it – has served to solidify bonds within Kasper Hjulmand’s team and unite the nation around them. …”
FIFA
W – Kasper Hjulmand

Italy remain top of Group C on goal difference despite being held in Rome
“Jorginho’s last-minute penalty miss ensured the race to finish first in 2022 World Cup qualifying Group C goes down to the wire as top two Switzerland and Italy played out a gripping draw. The Chelsea player blazed over after VAR was used to rule that Ulisses Garcia had shoved Domenico Berardi. Giovanni Di Lorenzo headed Italy level after Silvan Widmer’s superb opener. The Azzurri hold the edge going in to the last round of games with a goal difference two better than the Swiss. It means a straight shoot-out between the pair for top spot on Monday, with Italy at Northern Ireland and Switzerland at home against Bulgaria….”
BBC

Luis Suárez and Edinson Cavani might be headed for their last World Cup. But first Uruguay has to qualify.
“Luis Suárez arrived first. And in the ordinary run of things, for a city like Salto — a sleepy place tucked into a distant corner of a tiny country — that would have been its claim to fame: producing one of the finest strikers of a generation. Except that, precisely three weeks later, a second arrived. Edinson Cavani grew up only a few streets from Suárez. The curiosity that the two players who would, for more than a decade, help turn Uruguay’s national team into one of the most potent in the world were born in such quick succession, in such proximity, lends their origin story a faintly fantastical gleam. Lightning, after all, is not supposed to strike twice. …”
NY Times