“The 2021–22 FA Cup is the 141st edition of the oldest football tournament in the world, the Football Association Challenge Cup. It was sponsored by Emirates and known as the Emirates FA Cup for sponsorship purposes. The winners will qualify for the 2022–23 UEFA Europa League group stage. Premier League side Leicester City are the defending champions, having beaten Chelsea in the previous year’s final. The FA Cup is a knockout competition with 124 teams taking part all trying to reach the Final at Wembley in May 2022. The competition consists of the 92 teams from the Football League system (20 teams from the Premier League and the 72 in total from the EFL Championship, EFL League One and EFL League Two) plus the 32 surviving teams out of 637 teams from the National League System (levels 5–10 of the English football league system) that started the competition in qualifying rounds. …”
W – 2021–22 FA Cup
billsportsmaps
W – FA Cup
BBC – FA Cup 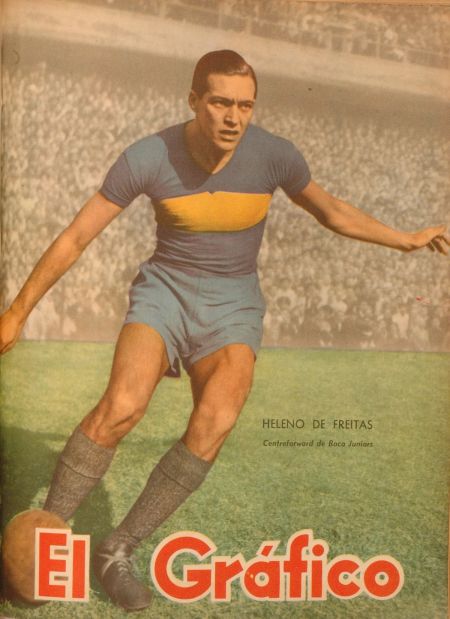 Heleno de Freitas (Boca)
“El Gráfico is an Argentine online sports magazine, originally published by Editorial Atlántida as a print publication between 1919 and 2018. El Gráfico was released in May 1919 as a weekly newspaper, and then turned to a sports magazine exclusively. It began to be scheduled monthly from 2002, and was discontinued in 2018, continuing only on internet. El Gráfico is widely the most regarded sports magazine in Argentina and Latin America. The magazine was nicknamed La Biblia del deporte (‘The Bible of sports’) due to its chronicles, notable journalists and collaborators and its photographies. … The best selling era of El Gráfico was during the 1986 FIFA World Cup when Argentina crowned champion, with 690,998 sold. The second place in the ranking of all-time best seller magazine is for the 1978 FIFA World Cup with 595,924. Diego Maradona was the sports man with the most appearances on the cover: 134, followed by Daniel Passarella (58) and Norberto Alonso (54). …”
Wikipedia
Angels with Dirty Faces – Jonathan Wilson: 15 – Our Way
Diego Maradona: A genius and the soul of a nation – Jonathan Wilson
El Pibe del Barrio: Understanding the Latin American archetype and what it means for U.S. Soccer