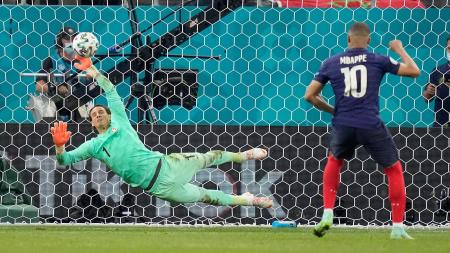 “Kylian Mbappé was France’s sure thing. That is why he was fifth in their list of penalty takers and is why, when he stepped up to keep them in Euro 2020, the thought he might miss felt like too heady a twist in the narrative. Things like that have simply not happened to Mbappé during a young career of rare accomplishment, but here came the kind of horror that exposes even the preternaturally gifted as flesh-and-blood mortals: Yann Sommer, Switzerland’s exceptional goalkeeper, smelled weakness and read his intentions correctly, diving right and clawing the spot-kick away. France were out; their delirious opponents had made their own slice of history and a tournament of unstinting drama took its least plausible turn yet. …”
Guardian
BBC: Kylian Mbappe and world champions France’s fall from top
BBC: France 3 – 3 Switzerland
Four Four Two: France out of Euro 2020 as Kylian Mbappe misses in shoot-out loss to Switzerland

This entry was posted on Tuesday, June 29th, 2021 at 12:12 am and is filed under Euro 2020, France, Swiss. You can follow any responses to this entry through the RSS 2.0 feed. You can leave a response, or trackback from your own site.