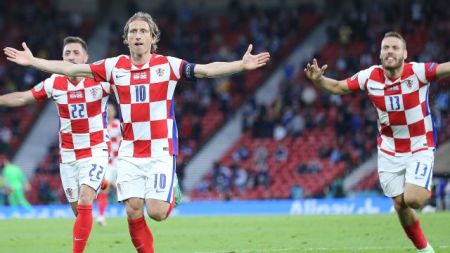 “They came to Hampden Park hoping for a night to remember, but in the end, Scotland‘s success-starved supporters had to make do with a goal they will never forget. Croatia’s 3-1 victory in Glasgow on Tuesday secured the 2018 World Cup finalists qualification for the round of 16, but it was Luka Modric‘s stunning second-half strike that ended Scottish dreams of an end to their perennial tournament misery. In 10 previous appearances at a major finals, either the World Cup or European Championship, Scotland were unable to progress beyond the group stage. …”
ESPN (Video)
BBC – Euro 2020: How Luka Modric’s genius for Croatia ended Scotland’s dreams
BBC – Croatia 3 Scotland 1