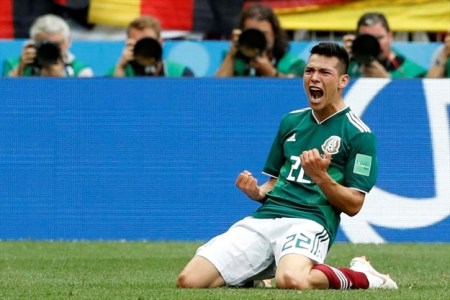 “MOSCOW — Hirving Lozano’s first-half goal and sturdy second-half defense gave Mexico a 1-0 victory over Germany on Sunday, providing the first major surprise of the 2018 World Cup. It was hard to recall a bigger result for Mexico, which has hosted the World Cup twice but has never advanced past the quarterfinals. Germany, the defending World Cup champion, has won the tournament four times, and was expected to seriously challenge for a fifth crown in Russia. But the Germans seemed flummoxed by the Mexicans’ speed and directness in the first half, and they couldn’t find a reply to Lozano’s goal.” NY Times

Mexico Just Taught Germany a Lesson: Never Win a World Cup
“The World Cup had its first great game on Friday when Spain and Portugal dueled to a 3-3 draw, and it had its first upset on Sunday, when Hirving “Chucky” Lozano gave Mexico a stunning 1-0 win over Germany. Mexico’s gameplan from the start was to rely on a counter attack to pressure their opponents, and Germany allowed them an unimpeded path. They pushed a high line—and stuck with 31-year-old Sami Khedira, a once rangy but now limited midfielder—in the middle to keep Mexico out of the box. Khedira is a step slower than he was four years ago, and Philipp Lahm and Bastian Schweinsteiger aren’t around to clean up for his mistakes.” The Ringer

He’s Got a Winning Record. So Why Do Mexican Fans Want the Coach Fired?
“PASADENA, Calif. — A few weeks ago, Juan Carlos Osorio, the coach of Mexico’s national soccer team, sat in the sunny courtyard of a Beverly Hills hotel, nursing a cup of coffee and reliving the moment in 2016 that very nearly derailed his 20-year journey from a small club on Staten Island to his first World Cup. Osorio, 57, had just presided over the most humiliating defeat in Mexico’s history, a 7-0 demolition by Chile in the quarterfinals of the Copa América, the world’s oldest international tournament. It was the sort of loss that gets a coach fired, especially in Mexico — provided Osorio didn’t quit first.” NY Times

Joshua Kimmich leaves a Philipp Lahm-shaped hole in the Germany defence
“There is no position over which the opinion of supporters and football managers can clash more starkly than full-back. Fans invariably love a marauding type who gets up and down the wing, dives into tackles and is generally both no-nonsense in defence and a swashbuckling attacking presence. Note the cult hero status that was quickly bestowed last year on Sead Kolasinac at Arsenal and note too how Arsène Wenger very quickly decided that he would rather stick with the more positionally disciplined Nacho Monreal. Telegraph

This entry was posted on Sunday, June 17th, 2018 at 10:33 pm and is filed under Football Manager, Germany, Mexico, NY Times, World Cup 2018. You can follow any responses to this entry through the RSS 2.0 feed. You can leave a response, or trackback from your own site.