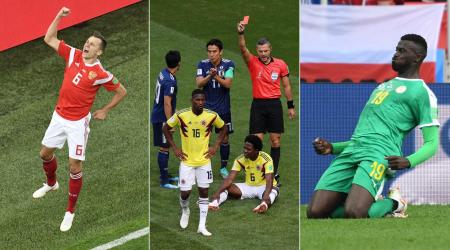 “Day 6 of World Cup 2018 is done, headlined by Russia’s 3-1 thrashing of Egypt, which gives the host nation six points and brings it to the cusp of a place in the knockout stage. The headliner was preceded by a pair of notable victories: Japan’s historic 2-1 win over Colombia (for reasons explained below), and Senegal’s 2-1 win over Poland, which was the first victory by an African team in the tournament. Every nation has now played at least once in Russia, where there has yet to be a scoreless draw, though there have been five own goals and a number of VAR interventions.” SI

“England defeated Tunisia 2-1 in Volgograd courtesy of good organisation in two different respects: a cohesive, unusual system in open play, and pre-planned set-piece routines. The former ensured England dominated, the latter provided the goals. Gareth Southgate has consistently deployed this 3-5-2 system since England clinched qualification for this tournament, and it’s proved difficult for opponents to cope with late midfield runs. While the three-man defence has made something of a comeback in the Premier League over the last couple of seasons, partly thanks to Antonio Conte’s impact at Chelsea, it’s generally structured as a 3-4-3 rather than 3-5-2, with two holding midfielders screening the defence, and two inside-forwards drifting inside.” Independent – Michael Cox

Tunisia 1-2 England: Southgate’s men hold their nerve, stay patient and find a way to win
“‘There are infinite routes to goal,’ the Uruguay manager Oscar Tabarez said after his side’s win over Egypt last Friday, ‘and all of them are equally valid.’ It’s just that the one England preferred to take – twice – was a Harry Kane header from a corner (much as Uruguay had opted for a Jose Gimenez header from a corner). There’s something a little odd about this bright new England, with its back three, its passing, its ace and its modernity scoring two from that most traditionally English of methods, but Gareth Southgate will not care and nor should any England fan. What was most impressive here was not so much the goals as the method.” Unibet – Jonathan Wilson

Sweden Moves on From Zlatan Ibrahimovic, But His Specter Still Looms

“NIZHNY NOVGOROD, Russia – There will come a day when this Sweden team can rid itself of the albatross of Zlatan Ibrahimovic, but it has not come yet. Sweden beat South Korea 1-0 on Monday, its first victory in the opening match of a World Cup since 1958. Two draws will see it through to the last 16 for the first time since 2006. It may not have been particularly fluent, but Janne Andersson’s side was compact and coherent, controlled the game and applied enough pressure to win. Yet even as the final whistle blew there were whispers on social media: what if Zlatan were there?” SI – Jonathan Wilson (Video) 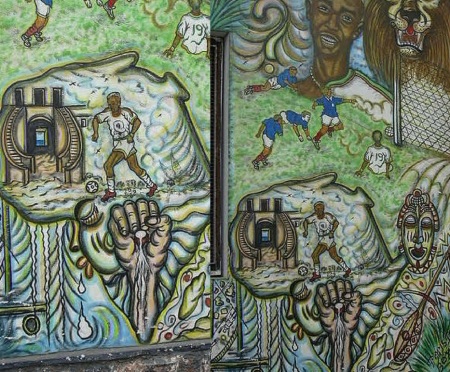 “In Kehinde Wiley’s 2008 portrait ‘Dogon Couple,’ a man wears the jersey of the Senegalese national football team, layered with a pendant bearing an image of Leopold Senghor. Two symbols—the image of the bespectacled intellectual and long-time president, and the seal of the Fédération Sénégalaise du Football—founded at the moment of independence, in 1960—alongside one another, echoing each other.” Africa in a Country

“Senegal deservedly defeated Poland in a game of few chances to claim the first win by an African team at the World Cup – although there was a hint of controversy about their second goal. M’Baye Niang sprinted back on to the field of play after injury and immediately intercepted a backpass from midfield, beating former Arsenal goalkeeper Wojciech Szczesny and Southampton defender Jan Bednarek to the ball. He then slotted into an empty net – to the confusion and disgust of several Poland players, who protested in vain to referee Nawaf Shukralla.” BBC (Video)

Mark Lawrenson’s pantomime punditry: a relic to cherish on the BBC

“Fifa are fond of telling us that football is a family. If so, Mark Lawrenson is the grumpy uncle one was compelled to invite to the gathering. But rather than simply sticking him in a secluded armchair and keeping him quiet with a gob full of Quality Street and cooking brandy, the BBC has let him loose on World Cup television viewers. Lawro has so far done two matches for BBC TV; reaction has been mixed. Which is to say, some people have hated it, and other people have really hated it. Or that has been the online response, anyway, with social media commentators vying to one-up each other with their spite and rage at his contributions to the France vs Australia and Belgium vs Panama matches.” Telegraph