“The only true Belgian, goes a long-running joke, is the king of the country. Riven by tensions between its French-speaking Walloons and Dutch-speaking Flemish, and with the identity of Brussels largely defined by it’s being the capital of Europe, rather than Belgium, the country’s existence as a unified nation often seems tenuous at best. But in the last decade, another national institution has come to symbolize what it means—or, at least, might mean—to be Belgian: the national soccer team, known as the Red Devils. Packed with star players well-known from their professional careers in the English Premier League (considered the world’s best), the national squad is also notably for its diversity, with many players from immigrant backgrounds. In 2014, the Belgian pop star Stromae wrote an anthem for the Red Devils and released a playful video with the coach and players. Heading into this year’s World Cup, the team embodies the contradictions, and possibilities, of an uncertain nation.” NYBooks

Belgium’s Last Stand
“In the span of about 30 minutes in the second half of their opener against Panama on Monday, Belgium displayed the heights of their potential, and the purest distillation of their flaws. After a first half with more squandered opportunities than most teams have in a full game, Belgium capitalized when Dries Mertens smacked a volley from the corner of the box past Jaime Penedo and into the back of the net. Just over 20 minutes later, Romelu Lukaku doubled his team’s lead, and then six minutes after that added a third goal for good measure. It was what happened between the Belgians’ opening goal and their second that was cause for concern.” The Ringer (Video)

“Day 9 of World Cup 2018 is done, highlighted by Brazil’s late 2-0 win against Costa Rica and the tears of Neymar, Nigeria’s breathtaking 2-0 victory against Iceland and Switzerland’s 2-1 comeback triumph against Serbia. The results set up what will be an incredible set of final matchdays across both groups. In Group D, only Croatia is through, and Nigeria, Iceland Argentina all remain alive for the second spot in the knockout stage. In Group E, no team has secured its knockout place yet, setting up a tense Brazil-Serbia encounter and an important Switzerland-Costa Rica one, even with Los Ticos being eliminated after their hard-fought loss.” SI

Why Is This Man Crying?

“Neymar wept. After tying its opener and enduring 90 minutes of deadlock against an underdog Costa Rica, the World Cup favorites Brazil scored twice in stoppage time to secure a badly needed victory. Cue the armchair psychologists. Was Neymar’s reaction to the final whistle an emotional response to his first goal in the tournament? A release valve for the pressure of being one of the world’s best players on its biggest stage? For the pressure of leading the tournament favorites? The pressure of being Brazil?” Slate (Video)

Shambolic, frenzied, anarchic – and Argentina crisis has Messi at its heart 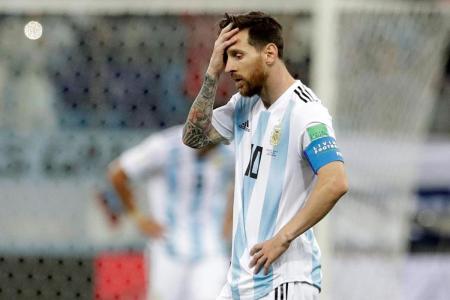 “It was in 1913 that Racing became the first non-Anglo side to win the Argentinian league title. For much of the century that has followed, Argentinian football has defined itself in opposition to the English, distancing itself from its British heritage. And yet, under pressure, in their frenzied desperation on Thursday, Argentina resembled nobody so much as England. This was shambolic. Too many players tried to do too much themselves. There was altogether too much running, too much frenzy, too many fouls conceded as they desperately tried to regain possession, too little thought. By the end, as Ivan Rakitic casually rolled in a sarcastic third for Croatia, Argentina were gone, any semblance of defensive structure blown to the winds.” Guardian – Jonathan Wilson (Video)

World Cup 2018: Jorge Sampaoli’s approach was an utter disaster that rendered Lionel Messi useless
“There was always a danger Argentina might flop at World Cup 2018, but it shouldn’t have been this pitiful. If Argentina were going to go down, they were going to go down fighting, with coach Jorge Sampaoli a noted advocate of aggressive pressing, attacking football and quick combination play. If those tactics exposed them defensively, it was a risk Sampaoli was willing to take. But the approach Sampaoli stumbled upon somehow provided all the drawbacks without any notable positives. Argentina didn’t press high, they didn’t attack relentlessly, and it’s difficult to recall any passing moves worth mentioning, yet they were still hopelessly open defensively, conceding space on the outside of their three-man defence readily. Only poor Croatian finishing prevented them from taking the lead earlier.” Independent – Michael Cox

Mentally and emotionally burned out, Lionel Messi crumbles under the burden of carrying Argentina at the World Cup
“By the time a humiliated Argentina emerged from the dressing room in Nizhny Novgorod, it was late – in so many ways. A stony-faced Lionel Messi at least led the way here, but this time with ample support as the entire squad followed tightly behind…and right on through the mixed zone without stopping once. Argentina were at last singing from the same hymn sheet in this World Cup by not saying anything all.” Independent

As fighters, as entertainers, as a team, this Argentina project has failed
“On 21 June 1978 Argentina’s World Cup defeat of Peru went down in history as one of the most controversial games ever. The goalfest and intelligent football that unfolded on that cold night in Rosario, as the wonderful Mario Kempes found his feet on his home turf of yesteryear, were eclipsed by allegations which kept conspiracy theorists and investigative journalists busy for years. Argentina, aware they needed to win by at least four goals to progress in their home tournament, triumphed 6-0 amid rumours that an exchange of grain between the countries had been brokered in the dressing room. They went on to lift the trophy.” Guardian (Video)

Russia Is Not This Good — Right?

“Before the 2018 World Cup kicked off last week at Luzhniki Stadium in Moscow, much had been written about why Russia was so bad at soccer. A convincing 5-0 opening match win over Saudi Arabia — Russia’s first win at the tournament since 2002 also matched its largest margin of victory at a World Cup — surely helped to allay some of those criticisms. But there was still no looking past the fact that the host nation ranked 70th in the FIFA world rankings and was looked at by bookmakers as a relative long shot to win the whole thing.” FiveThirtyEight

Moscow – Between darkness and light

“MANUEL VETH uncovers the storied history a football city that never sleeps, and of the Russian capital’s big clubs, from the Soviet era to the days of wealthy Oligarchs. Moscow has always been a city of progress. The pace at which it has developed since the collapse of communism has been breathless. In a sprawling city, there exists a patchwork of classical Tsarist architecture mixed with Stalinist skyscrapers, Khrushchev’s brutalism and post-communist extravagance. All of this is visible from the viewing platform on the Sparrow Hills. This viewpoint, located next to the Moscow State University, one of the Seven Sisters, which are seven skyscrapers built by Stalin in a mix of Russian baroque and gothic styles. From Sparrow Hill one can see the remaining six of the Seven Sisters, the Moskva river that gives Moscow its name, the towers of New Moscow’s financial district, and most importantly for football fans, the gigantic Luzhniki Stadium.” Football Pink