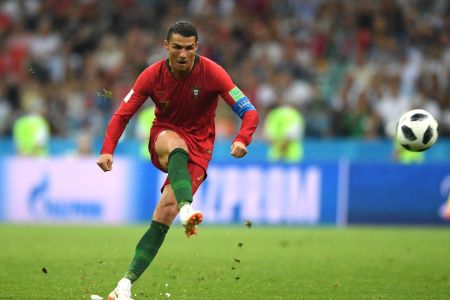 “Cristiano Ronaldo produced one of the great World Cup performances as his dramatic late free-kick earned Portugal a draw with Spain in a classic encounter in Sochi. The Real Madrid forward’s 88th minute swerving set-piece soared into the top corner to deny the Spanish a much-needed victory at the end of what has been a painful week for them in the south of Russia.” BBC (Video), The Ringer: Cristiano Ronaldo vs. Spain Was the Wake-up Call the World Cup Needed

“Slowly, slowly, it had been coming. After 80 minutes in which almost nothing had happened, other than the non-appearance of Mohamed Salah, Uruguay had begun to increase the pressure. Edinson Cavani had a volley pawed away by Ahmed El-Shenawy then smacked a free-kick against the post before, with a minute to go, José María Giménez rose to meet a right-wing corner with a powerful header and Uruguay, for the first time since 1970, had won their opening game at a World Cup.” Guardian – Jonathan Wilson, Guardian: Uruguay’s Diego Godín: ‘They kicked Luis Suárez out like a dog. It was unjust, disproportionate’

Slavery, Racism and Homophobia – The Future of the World Cup

“The 10th of December 2010 won’t seem like a particularly important date to most football fans, but it was the day when FIFA announced the hosts for the next two World Cups. Russia and Qatar were awarded footballs showpiece event which at the time was controversial.” PogMoGoal

Photos: Soccer Fields Around the World 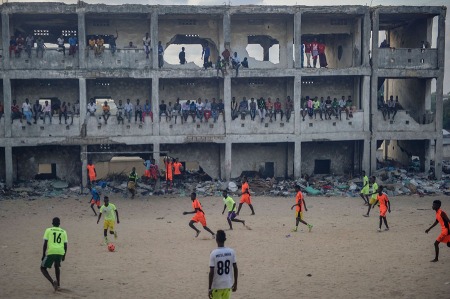 “One of the most appealing aspects of soccer is its simplicity—a ball, some open space, goal markers, and you can play. As the 2018 World Cup kicks off in Russia, with matches held in massive modern arenas, here is a look at the beautiful game in action in some smaller and more unusual venues around the world, including pitches built on a glacier, on a beach, floating in a river, made of straw, on a rooftop, and more.” The Atlantic

“Iran won their first match at a World Cup finals since 1998 as Morocco substitute Aziz Bouhaddouz scored an own goal in injury time. Bouhaddouz put the ball into his own net with a diving header at the near post in the 95th minute as Morocco defended a left-wing free-kick. The result was harsh on the African side, who had wasted numerous chances in the first half and were denied late on when Iran goalkeeper Alireza Beiranvand produced a fine save from Hakim Ziyech.” BBC (Video)

“The first marquee match of the 2018 World Cup is Spain against Portugal. The match had enough drama to stand on its own merits, one of the favorites to win the tournament playing against the current champions of Europe, and that was before a chaotic 48 hour whirlwind laid waste to Spain’s camp. In the space of two days Spain’s manager Julen Lopetegui was hired to manage Real Madrid, announced the news suddenly before it leaked, and then was fired over how it all went down.” StatsBomb