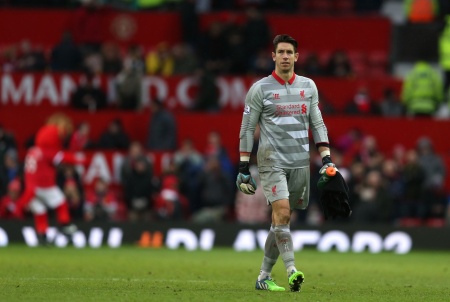 Brad Jones
“I am drenched and broadly speaking lost, trying to get back from Manchester after having discussed Liverpool’s 3-0 defeat to Manchester United live to a nation who would prefer it if I didn’t swear or blaspheme. Bar one shout of ‘God in heaven’ (I became my dad when I was five) I did alright considering it could be the most frustrating football match I have ever seen. BBC Sport in Manchester is what the future looks like. You could set a phenomenal sci-fi there. Everyone was very nice, you’ll be pleased to learn.” TAW

There are pros to keeping Rodgers, but there are also a boatload of cons
“When in doubt, turn to science, and right now, my beloved Liverpool’s full of doubt. But since we’re not real scientists and the more numbers you bring to soccer, the more odious it becomes, the simple elegance of a pros-cons list is our best tool for figuring out Brendan Rodgers’ future. Unless you slept through the weekend, you know Young Brendan’s future is the subject of much doubt. Lose 3-0 to United, face the music. In this case, that will mean a week’s worth of hot takes on how hot his seat has become …” Soccer Gods

A Season of Failed Balance: Why Liverpool Can’t Have It All
“It took Manchester United all of 12 minutes to score against Liverpool. Goals change games no matter what, obviously, but conceding an early goal on Sunday was a particularly difficult pill for Liverpool to swallow. The Reds were desperately trying to reach some sort of equilibrium after being knocked out of the Champions League, and a match against their biggest rival would’ve been a good place to start.” Grantland (Video)

Tactical Analysis: Manchester United 3-0 Liverpool | Rodgers’ approach allows Van Gaal to use his wing-backs
“There were times where this fixtures involved two of the most in form teams in England, and there were occasions where the gulf in class was evident. But the first Manchester United-Liverpool clash of 2014/15, had a slightly altered flavour to it. Two sides fallen from their respective perches, some longer than others, looking to recover before the stagnation persists. Despite the score-line, neither side truly impressed but even if there’s a lack of performance, United showed they haven’t forgotten how to win football matches.” Outside of the Boot

Liverpool – from ruthless to toothless in nine months
“When Liverpool’s team coach pulled out of Old Trafford last March, it was fuelled by the growing belief that years of domination by Manchester United were finally coming to an end. Liverpool’s 3-0 win, built on the thrilling attacking strategy of manager Brendan Rodgers, hugely flattered a United side in disarray under David Moyes and cast adrift of their resurgent rivals by 14 points.” BBC

“I’ve always wondered what would happen if the bears from Goldilocks sipped porridge and sat around watching a soccer game. Papa Bear, a Louis van Gaal disciple, would say ‘this team plays too defensively.’ Mama Bear, ever the optimistic moderate, would proclaim ‘this team plays just right.’ Baby Bear, exposed to José Mourinho at too young and impressionable age, would say ‘this team doesn’t play defensive enough.’ In the second leg of last night’s Liga MX final, Papa Bear would have been right. At least, in regard to Tigres. While the challengers boasted one of Liga MX’s best defenses this past season, as we noted earlier, goals win championships in Mexico, not clean sheets. Tigres beat Club América 1-0 on Thursday in leg one because rather than dropping deep, it advanced its lines and took the game to the Aguilas.” Soccer Gods

“In Turin, the locals spoke fretfully of a bestia nera coming to pay Juventus a visit. Those words translate in English to black beast, although bête noire might sound more familiar. The expression has its origins in medieval times, when the devil would often be represented in works of art as an animal with black fur and burning eyes. These days it is applied mostly by Italians to sporting bogey teams. No demon had troubled Juventus as greatly over the last few seasons as Sampdoria – a side they had beaten just twice in their latest six attempts. The Blucerchiati were responsible for the Old Lady’s most recent home defeat, recovering from a goal and a man down to snatch an unlikely 2-1 victory in January 2013.” Guardian

Rematches, Wenger reunion headline Champions League knockout draw
“After a group stage in which the main lesson was that Real Madrid and Bayern Munich are still the teams to beat in this competition, the draw for the round of 16 took place Monday. The odds on the two favorites will have shortened considerably after decent draws, and two big guns will fall by the wayside after Paris Saint-Germain was drawn against Chelsea and Manchester City against Barcelona in a pair of repeat matchups from last season. There was also a moment of sentimentality in the draw, as Arsenal was drawn against AS Monaco, where coach Gunners coach Arsene Wenger was manager from 1987-1994. Here’s a breakdown of Monday’s draw…” SI

A bizarre halt in the rise of Martin Montoya

“With Spain’s success at youth level on the international stage, particularly over the past 5 years, one would naturally expect a lot from a player who featured heavily for La Rojita in their recent consecutive U21 Euro title wins. Comparing Spain’s starting XIs for both finals, against Switzerland in 2011 and Italy in 2013, there were 3 constants on the pitch. One of those players is now 1 of the best goalkeepers in the English Premier League and another was a key component in Bayern Munich’s successful defence of their Bundesliga title in his debut 2013/14 season. The 2 players in question? David de Gea and Thiago Alcântara respectively. And what of the third? Well, that was Martin Montoya.” Outside of the Boot

“Rangers’ losing performance at Queen of the South, live on BT Sport on Friday, was typical of Ally McCoist’s managerial reign. But in pre- and post-match interviews he wore the demeanour of someone calling a more important bluff. Only this morning have Rangers confirmed he’d handed in his notice hours before kick-off in Dumfries. McCoist, in the post since June 2011, bizarrely stated and restated “I am the Rangers manager”. His default chirpy setting was more sad than inappropriate but epitomised the club since 2012’s liquidation: a hollow impersonation of power.” WSC