Three things we learned this week in Ligue 1

“Sunday’s Rhône derby produced one of the most high-profile shocks of the Ligue 1 season so far, as Christophe Galtier’s Saint-Étienne cruised to a 3-0 victory against their bitter rivals Lyon, with a result which saw the home side end their twenty-year wait for a derby victory at the Stade Geoffroy-Guichard. The fixture, which sees the traditionally industrial city of Saint-Étienne clash against its historically bourgeoisie neighbour Lyon, is usually always a closely fought contest, so the scoreline’s large margin will come as an even greater surprise.” backpagefootball

Florian Thauvin’s pursuit of excellence
“There hasn’t been too many complaints for Marseille fans this season. Sitting alone in first place through 40% of the season doesn’t lend too much to criticism, especially when one takes into account how disappointing last season was both domestically and in the Champions League. This iteration of Marseille has been one of the more eye pleasing to date. Marcelo Bielsa has brought an intoxicating style to the Veledrome through a combination of a high pressing tempo and reinvigorating the likes of Andre Pierre Gignac and Dimitri Payet to levels we haven’t seen in years.” backpagefootball

Portugese Column: Why do Benfica underperform in Europe?

“The midweek European matches saw current Portuguese champions Benfica get knocked out of international competitions for the season. Since Jorge Jesus took over in 2009, Benfica have won the title twice and played in the Champions League group phase five times, yet only once have they qualified for the latter stages. And whilst on all other occasions they managed to hold on to the third spot and subsequent qualification for the Europa League, this time not even the last group game against Bayer Leverkusen will help them go above fourth place.” Outside of the Boot

Oh, Hello, Manchester United. Look at You in Fourth Place

“Look at you, Manchester United, just casually sitting there in fourth place, as if that horrendous start to your season weren’t even a thing. After dismembering Hull City, 3-0, this weekend, United are now the proud owners of a three-game winning streak for the first time in 11 months. The easy victory comes after one-goal victories at Arsenal and at home against Crystal Palace. So, is United nearing the end of an 18-month-long post–Alex Ferguson tunnel, or is that light just another misleading string of results, like last December, when a David Moyes–led squad beat West Ham, Norwich City, and Hull City in the space of a week?” Grantland 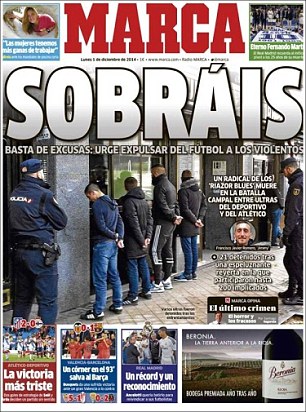 “Spanish football is left mourning the death of Deportivo La Coruna fan Jimmy Romero who had to be pulled from the Manzanares River close to Atletico Madrid’s Calderon stadium, where Atletico beat Deportivo 2-0 in a match that became a mere footnote to the violence that marred it. Eleven other people suffered injuries while there were reports that over 200 people were involved in an organised fight that took place about an hour before Sunday’s kick-off. Atletico coach Diego Simeone said the trouble was a social problem and his club president Enrique Cerezo would say it ‘had nothing to do with football’. A local politician Cristiano Cifuentes called it an ‘isolated event’ that the police, kept at 200-strong because it was seen as a low-risk game, could not have foreseen.” Outside of the Boot

“Jose Mourinho says that football is a simple game at heart and that there is a tendency to overcomplicate analysis of it. Mourinho is known to be one of the very best tacticians and strategists in the game today, with his Chelsea side still unbeaten and leading the Premier League. But he says football is a simple game balanced between defence and attack, even if it must be underpinned by solid principles.” Pitchside Europe (Video)

“By any reasonable standard, Tim Howard had enjoyed a remarkable career heading into World Cup 2014. Even in a country renowned for goalkeepers, the 35-year-old Howard stood out, holding U.S. national team records for appearances and victories by a goalie. He had played in 342 Premier League games for Everton and Manchester United, and he was the only American to have won England’s FA Cup.” SI