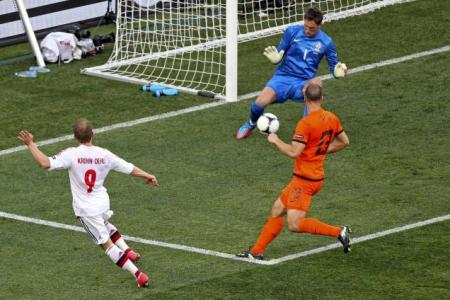 Michael Krohn-Dehli
“Holland had the majority of possession and chances, but Denmark snatched the three points. Morten Olsen chose the XI that was widely expected to start the game, in a rough 4-2-3-1 formation. Bert van Marwijk’s starting selection was also as predicted, with Ron Vlaar in the side to replace the injured Joris Mathijsen. Jetro Willems became the youngest player in European Championship history at left-back.” Zonal Marking

Three Thoughts: Denmark gives the Netherlands more to worry about
“1. The defensive worries for the Dutch were not overstated. The Netherlands created enough chances to win this game twice over. But at the back, things were actually worse than the pessimists had anticipated. Every time Denmark ventured forward in wide positions, the Oranje fullbacks looked vulnerable. The problem was partly due to the two “controllers” — Mark van Bommel and Nigel de Jong — being too slow to come out to center to cover. But that didn’t excuse the utter sluggishness from Gregory van der Wiel and Jetro Willems in the one-v.-ones against decent, but not exactly stellar, opposition.” SI

Dutch face uphill battle in Group B
“All week long the Dutch have said that nothing less than winning the European Championships will do. If they’re to end a 24-year drought at major tournaments, a drought that belies their immense talent, it’ll have to happen the hard way. After losing 1-0 to Denmark in Kharkiv, Ukraine on Saturday, simply advancing from the Group of Death will take some doing. The mighty Germans are up next and Dutch manager Bert van Marwijk knows it’s a must-win game.” ESPN (Video)

Euro 2012 Day 2: Dutch loss a big story, but don’t overlook the Danes
“There were two things that the managers of Netherlands and Denmark agreed on before the teams met on a clammy Saturday evening in Kharkiv, Ukraine: The Dutch were the favorites, and their players are ‘arrogant in a good way.'” SI

This entry was posted on Sunday, June 10th, 2012 at 5:02 pm and is filed under Denmark, Euro 2012, Football Manager, Holland. You can follow any responses to this entry through the RSS 2.0 feed. You can leave a response, or trackback from your own site.

One Response to Denmark 1-0 Holland: Krohn-Dehli goal provides the first surprise of the tournament