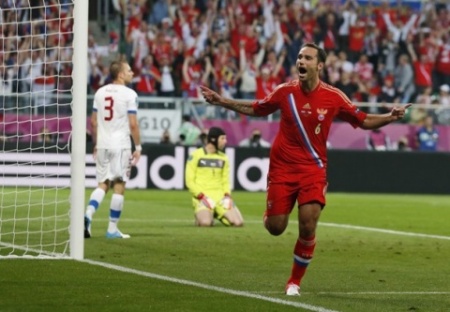 Roman Shirokov
“Russia made a terrific start to their Euro 2012 campaign with a high quality counter-attacking performance. Dick Advocaat named his expected side – a 4-3-3 system, with Vyacheslav Malafeev in goal. Michel Bilek’s side featured one alteration from the expected XI – Michal Kadlec moved to the left, where he frequently played during qualification, which meant Roman Hubnik playing at centre-back, and no place for David Limbersky. Russia were simply the better side throughout the game – more organised defensively, and showcasing much more penetration going forward.” Zonsl Marking

Russia too strong for Czechs
“Andrei Arshavin frustrated Arsenal fans this season, but he remains a joy in interviews. Call him a thoughtful, philosophical chap. Here was more proof as Arshavin discussed Russia’s mindset. ‘To put it simply, what lies in the Russian character, and why someone might consider us a dark horse, is that we can lose against every team and we can win against every team,’ he told UEFA.com.” ESPN (Video)

Three thoughts from Russia’s 4-1 victory over the Czech Republic
“1. Russia is excitingly fluid. The potential was always there. This is a Russian side that has been together for a long time. All of the starting XI apart from Alan Dzagoev either played at Euro 2008 or would have played if not for injury or withdrawal. Six of the starting outfielders also play for Zenit St Petersburg, providing Russia with a greater mutual understanding than just about any side at the European Championship. On Friday, that chemistry paid off: With Aleksandr Kerzhakov’s natural inclination to drop deep and operate almost as a false nine, Andrei Arshavin and Dzagoev’s cutting in from the flanks and Aleksandr Anyukov and Yuri Zhirkov overlapping from full back, Russia was superbly fluent.” SI – Jonathan Wilson

“One goal each, one red card each, and one point each in an entertaining opening game of Euro 2012. Poland went with their expected side – there were no real debates to be settled in the starting line-up, and Franciszek Smuda used his usual structured yet energetic 4-2-3-1 system. Fernando Santos had two major decisions to make. The first was in goal, where Kostas Chalkias was chosen from Greece’s three distinctly average goalkeepers. The second choice was on the right of the front three, where Sotiris Ninis started over Dimitris Salpingidis. This was a game of three phases: 11 v 11, 11 v 10, 10 v 10. Both sides looked in a commanding position at one stage, but a draw was a fair result.” Zonal Marking

Greece, Poland play to 1-1 draw in opening match of Euro 2012
“Greece missed its chance for a stunning comeback victory, botching a penalty kick, then hanging on for a 1-1 draw with co-host Poland in the opening match of the European Championship on Friday. Both teams had players expelled, including Polish goalkeeper Wojciech Szczesny.” SI

Dimitris Salpingidis the savior
“As Dimitris Salpingidis stood in the mixed zone, the grin on his face was akin to that of a burglar who had just made off with the heist of a lifetime. Indeed, in his back pocket he not only held the hopes of his suffering countrymen back home in Greece, but those of a Polish nation desperate to start off its hosting of Euro 2012 in style. That Poland was forced to settle for a 1-1 draw was in no small part because of his efforts.” ESPN

Euro 2012: England humbled by Auschwitz pain and misery as Wayne Rooney vows it will never be forgotten

“Wayne Rooney and the England players kept coming back to the same photograph, the image of the SS doctor, Heinz Thilo, standing on the ramp at Birkenau and signalling whether the distressed, disorientated souls stumbling from railway wagons would work or go straight to the gas chambers.” Telegraph – Henry Winter