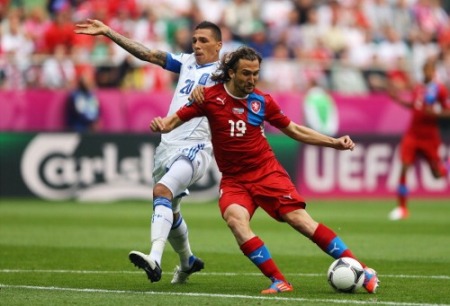 Petr Jiracek
“Eight days ago, the Czech Republic’s dreams of advancement at Euro 2012 looked to be in tatters. Remarkably, the Czechs came back from the dead to beat Poland 1-0 to win Group A and send the Euro 2012 co-host crashing out of the tournament. Petr Jiracek scored the game-winner in the 72nd minute, finishing off a counterattacking move that was as swift as it was deadly. Poland, meanwhile, failed to make the most of another impressive start when it squandered several chances and in the process left a nation in despair.” ESPN (Video)

Three thoughts: Czechs surprise with 1-0 victory over host Poland
“Here are three thoughts after the Czech Republic’s 1-0 win against Poland, which gave the Czechs first place in Group A, with Greece advancing in second place and Russia and Poland being eliminated…” SI

Petr Jiracek strike puts Czech Republic through and Poland out
“Only the hardest of hearts could not feel for Poland. They had surfed a wave of emotion in the buildup to this tie and they believed that the fairytale script would play out. On their turf, in front of their passionate supporters, they would march into their first ever European Championship quarter-final. For the opening half-hour, as they subjected the Czechs to a battering and this stadium rocked to a memorable beat, it looked as though it would happen. An almighty party loomed. But football has the unerring capacity to reduce dreams to dust in the blink of an eye. Here in Wroclaw, the pain was triggered by a swing of Petr Jiracek’s boot.” Guardian

So much for the “dull” Group A

“By the time Euro 2012 is finished, all four groups (and not just B) will be considered deadly in some way. But Saturday’s gripping conclusion wasn’t supposed to go like this. Group A was long considered to be the dull one. The ugly duckling. A quartet of teams that was impossible to love. Yet in Greece’s stoic, backs-against-the-wall 1-0 win over Russia and the Czech Republic’s 1-0 triumph over Poland, we got a weirdly beautiful conclusion given the way both sides started the tournament.” ESPN (Video)

Euro 2012: Giorgos Karagounis avoids Greece exit and makes Russia pay
“Forecasts of a Greek economic recovery have been taken more seriously than Fernando Santos’s prediction that his players would be the ones celebrating at the end of this game; yet after a famous victory, celebrate Greece did. Russia were surprisingly sent home from the European Championship by the combined might of Greece and the Czech Republic, the former pulling off an unexpected yet wholly deserved victory here and the latter claiming the other qualification spot with a win against Poland.” Guardian

“Three thoughts from England’s dramatic 3-2 victory over Sweden in Kiev, Ukraine. 1. England is winning with 4-4-2. There is a scene in Steve Barron’s 2001 film Mike Bassett: England Manager, an affectionate satire on the England national team, in which Ricky Tomlinson, playing the title character, reaches the end of his tether. He reacts furiously to the suggestion that he might experiment tactically. “Four-four-fookin’-two,” he shouts as the audience laughs at a poor, befuddled man out of his depth. Eleven years later, England is again playing 4-4-2. And somehow, it seems to be working.” SI – Jonathan Wilson

“More than fifty years after covering his first World Cup in 1962 in Chile, French journalist Thierry Roland passed away on Saturday at the age of 74 prompting tributes from the highest spheres of France’s political scene, starting with President François Hollande, all the way down to the French players in Ukraine from Gael Clichy to Samir Nasri. Perhaps the only football-related figure that was more appreciated than Zinedine Zidane in France, Thierry Roland was one of these people which you would be forgiven to think they were immortal. After beginning his career as a football journalist as an 18-year-old in 1955, first on the radio before making the big move to live television, Roland went on to commentate thirteen World Cups and nine European Championships, spearheading more than 1300 football games in total for France’s foremost TV channels, ORTF from 1955 to 1968, Antenne 2 from 1975 to 1984, TF1 from 1984 and 2004, M6 from 2005 till yesterday.” In Bed With Maradona (Video)