“Zambia 0-0 Ivory Coast (Zambia win 8-7 on pens). Stopila Sunzu began Sunday as an unheralded centre-back for the Congolese side TP Mazembe. He ended it as the unlikely hero of one of the greatest stories of redemption football has ever known. As Kalusha Bwalya, the greatest Zambian footballer of all time, was engulfed by the Zambia players after their victory in a penalty shoot-out, there were tears of joy but also tears born of the knowledge that this should have been his team-mates celebrating with him.” Guardian – Jonathan Wilson

Zambia 0-0 Ivory Coast: Zambia win the 2012 Africa Cup of Nations on penalties
“Zambia completed an astonishing victory on penalties after a tight final. Hervé Renard made the predictable but astute decision to switch to the team which ended the semi-final win over Ghana. That meant Emmanuel Mayuka starting upfront, Chisamba Lungu on the wing, and Isaac Chansa back in the centre. After plenty of rotation throughout the competition, François Zahoui went for an unchanged side from the XI which beat Mali in the semi-final. However, there was an early change for Zambia when left-back Joseph Musonda went down injured, and was replaced by Nyambe Mulenga, shown on the diagram.” Zonal Marking

Zambia’s triumph heals 19-year-old rift with Gabon over plane disaster
“Of all the extraordinary memories of the Africa Cup of Nations final, perhaps the most remarkable was the reaction of the crowd. In the aftermath of the 1993 plane crash that killed 18 Zambia players just after take-off after refuelling at Libreville, relations between Zambia and Gabon sunk to ugly lows.” Guardian – Jonathan Wilson

The 2012 African Cup Of Nations: The Final
“Cote D’Ivoire never had a chance. Whatever the multi-talents of their squad, the Elephants were going to struggle in this African Cup of Nations final…up against two teams. As if the Zambian side at this competition wasn’t good enough, there was the memory of their 1993 predecessors with which to contend, and the current squad’s hugely admirable determination to do justice to that memory. Arguably Zambia’s most-talented, all-but-one of the 1993 squad lost their lives in a plane crash off the Gabonese coast near capital Libreville – the venue for this year’s final – as they journeyed to a World Cup qualifier in Senegal.” twohundredpercent

Best and worst moments from the 2012 Africa Cup of Nations
“From the disappointment of Senegal, to Kily Alvarez’s goal and Ali Bongo’s wild celebration…” Guardian – Jonathan Wilson

Spot-kick drama secures fairytale title
“Zambia clinched their first African Nations Cup crown with a poignant penalty shoot-out win over Ivory Coast. Nineteen years after a plane crash which killed 18 members of their squad in Libreville, the Chipolopolo returned to the Gabon capital to record the most famous victory in the country’s history. A dramatic shoot-out at the end of 120 minutes of largely underwhelming football went the way of Zambia when Gervinho shot wide and Stophira Sunzu stepped up to slot home.” ESPN

Time To Draw A Line Under The Suarez Incidents

“The football was always going to be overshadowed on Saturday lunchtime. It has been that sort of a season. At least, though, another gut-wrenching weekend of tribalism and mud-slinging, some good finally seems to have come from the poisonous atmosphere between Liverpool and Manchester United, and perhaps now we can get back to focussing on what continues to be a fascinating season in the Premier League.” twohundredpercent

“Falkirk is a small town located in the Central Lowlands of Scotland, populated by just over 30,000 people it is renowned for many attractions like the Falkirk Wheel, the remnants of the Antonine Wall and for being the town where John Logie Baird was born – the legendary inventor of the Television. One thing the small town isn’t renowned for though is its football, but due to the talented emerging youth in its biggest local team, Falkirk is being put on the map.” In Bed With Maradina

All managers great and small 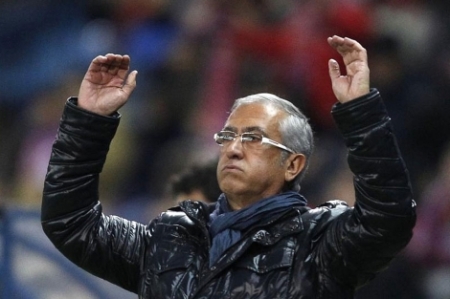 Gregorio Manzano
“During a podcast I did for the US a few months ago, I was asked who my three favourite managers were in La Liga, aside from the famous few. I replied with Marcelino, Manolo Preciado and Gregorio Manzano. The perceptive ones among you will realise that they have all been subsequently sacked – a fact that was pointed out to me by the interviewer, a few days ago in an e-mail entitled ‘The kiss of death’.” ESPN

“Gerard Piqué was as good as his word. A week or so ago, when Real Madrid extended their lead at the top of the table to seven points, he insisted that Barcelona would do all they could to make the rest of the season feel very long indeed for José Mourinho’s team. On Saturday night, they did. The rest of the season will indeed feel long for Madrid. And for everyone else: three months of filler before the inevitable, almost half the season just waiting for it to end – for Real Madrid to finally collect their league title, reclaiming it from Barcelona four years later. An entire country of football fans joining the queue at the post office, not daring to move, shuffling a little closer every week. The wait will be a long one, but for Real Madrid it will be worth it.” Guardian

“It is now 34 years ago, but the controversy over the Argentina-Peru match in the 1978 World Cup does not want to lie down and die. Hosts Argentina, needing at least a four-goal margin to reach the final, won 6-0 and then went on to beat the Netherlands and claim their first title. Last week, veteran Peruvian politician Genaro Ledesma added fuel to the fire. A prisoner of Peru’s military government at the time, he claims Argentina’s military dictatorship agreed to take custody of him and other dissidents in return for Peru throwing the match.” BBC – Tim Vickery