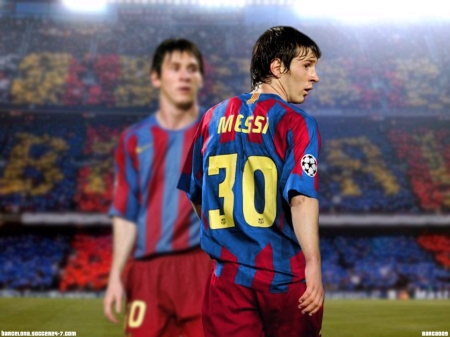 “The fact that Real Sociedad are no suffering saps – or Real Madrid perhaps – makes the 5-0 win for ‘Qatar Foundation presents Pep’s Dream Boys!’ over La Real so darned impressive. It’s hard to know whether the match highlight was Leo Messi weaving past five defenders on the edge of the box to equal Ronaldo’s league tally of 17 goals, or the outstanding Argentine finishing off a 28 pass move straight from the second half kick-off. ” FourFourTwo

The kids are alright
“The news that January’s Ballon d’Or will be handed to one of the three musketeers, Andres Iniesta, Leo Messi or Xavi Hernandez, is significant in various ways. Despite that opening assertion, it’s not the first time that one club has offered up all three candidates for the prize. In 1988, if I’m not mistaken, Marco van Basten won the gold, with his Milan team-mates Ruud Gullit and Frank Rijkaard slightly lower on the podium, and the next year the same guy took the top prize, challenged only by Rijkaard, again, and Franco Baresi.” ESPN

Benitez under pressure at Inter

“Two quotes to reporters — in the space of a few days — from Inter president Massimo Moratti neatly sum up why the bad old days may be back. ‘Ten years ago, I would have sacked Rafa Benitez by now, but I’ve grown as well, we all have.’ Then, a few days later. ‘I’m not going to create problems before or during the World Club Cup, afterward, we’ll see.'” SI

“The champions of all the continents have congregated in Abu Dhabi for the annual World Club Cup – to the usual European indifference. The great Brazilian left-back Roberto Carlos recently spoke of how, in 2000, he tried in vain to get his Real Madrid team-mates excited at the prospect of becoming world champions, but they treated it as a holiday. It did not endear him to fans of Corinthians, his current club, who won the title a decade ago.” BBC – Tim Vickery

Apollo 11 and a Football Pitch

“You might remember this map – showing the walking routes of the Apollo 11 astronauts superimposed onto a standard-sized football pitch. On MTMG previously… The original map is actually taken from one of NASA’s own excellent sites – here – but still everyone treated it as something of a joke.” More Than Mind Games

“The starting line-ups Dortmund weren’t at their best, but were still relatively comfortable. Jurgen Klopp selected an unchanged side, and with the exception of the absent Kevin Grosskreutz, this is the XI he has favoured so far this season.” Zonal Marking

“Scandal rocked and then destroyed one of Europe’s finest ever sides in the 1990′s. Juliet Jacques reflects on Olympique Marseilles’ return to the top as a personal highlight of 2010.” In Bed With Maradona