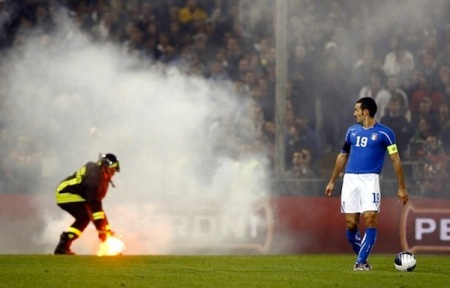 “Incidents like yesterday’s fan violence at the Italy Serbia Euro qualifier in Genoa follow a similar pattern. Journalists and bloggers await the match while discussing the usual tidbits about injured players and group tables and previous encounters and betting odds, when suddenly something happens that goes beyond the meeting of two footballing nations, like fans throwing flares on the pitch while systematically destroying crowd barriers.” (A More Splendid Life)

Violent Fans Force Italy-Serbia Match to Be Suspended
“UEFA, soccer’s governing body in Europe, announced ‘it has immediately opened a full and thorough disciplinary investigation into the incidents of serious disorder witnessed at the match and the circumstances surrounding it.’ The statement, posted on the UEFA Web site, said that a report will be issued to the Control and Disciplinary Body and a meeting is set for Oct. 28. The punishments, under UEFA regulations, “range from a reprimand or fine, up to a stadium closure or ‘disqualification from competitions in progress and/or exclusion from future competitions.'” (NYT)

Serbian thugs are the toys of nationalist and neo-fascist leaders
“For the second time in three days Serbian thugs have laid waste to a European city in riots that have combined wanton and random violence with organisational talent and political backing. Yesterday in Genoa, the Scottish referee Craig Thomson had first to delay the kick-off for the Euro 2012 qualifier between Italy and Serbia by 45 minutes because of fans’ rioting, and then call the game off after seven minutes. Earlier the angry young men from Belgrade went on the rampage in the Mediterranean port and Uefa have opened a ‘full and thorough’ investigation into the incidents.” (Guardian)

“7.36pm: Jon Saraceno of USA Today has been on Sky Sports News, and he says the concern for sports fans in the US will be whether John W Henry’s use of funds at Liverpool will have implications for the Boston Red Sox. However, Saraceno said, Henry is a shrewd businessman and there should be no prospect of that happening.” (Guardian)

Martin Broughton comes out roaring after quiet man saves Liverpool
“Throughout the grim course since the 1990s of English football clubs being bought by ‘owners’ for personal enrichment, contrary to the game’s time-honoured tradition that directors should be “custodians”, none have been served with the wallop meted out today to Tom Hicks and George Gillett.” (Guardian)

Liverpool sale: Fans have new heroes after victory in the high court
“Liverpool is littered with heroes and this morning, a few minutes after 11 o’clock, their supporters greeted some more. As Martin Broughton, the club’s chairman, stepped out of Court 18 of the Royal Courts of Justice, followed by his fellow directors Christian Purslow and Ian Ayre, and the trio’s legal team, they were met by roars of approval from waiting men carrying Liverpool scarves and shirts emblazoned with Liverbirds. It was a curious sight but a wholly appropriate one given the momentous victory that had just been achieved.” (Guardian)

“Here’s the important thing to remember when it comes to experiments in soccer, or anywhere else for that matter: sometimes the results are gonna stink. Testing a different tactical arrangement was certainly worth a look-see. And who has enough imagination to say what Tuesday’s new formation would have looked like with Landon Donovan in one of the wide spots? U.S. coach Bob Bradley arranged his team in (ostensibly) a 4-3-3 for Tuesday’s friendly with Colombia outside Philadelphia.” (SI)

England 0-0 Montenegro: England outnumbered in the centre and too predictable on the flanks 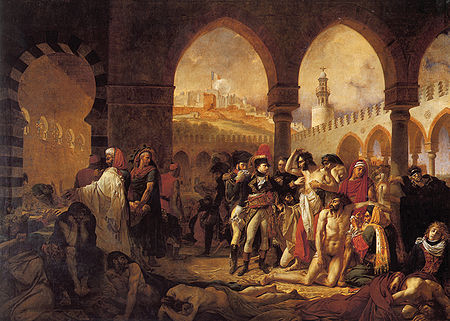 Bonaparte Visiting the Plague Victims of Jaffa, Antoine-Jean Gros
“Roughly a 50:50 split between a lack of English creativity and some good Montenegrin defending produced a goalless game at Wembley. England went with their expected side – Peter Crouch and Wayne Rooney upfront, with Adam Johnson on the right and Ashley Young on the left, both cutting inside onto their stronger feet. Aside from that, Capello had few options and the choices were straightforward.” (Zonal Marking)

Match of the Midweek: England 0 – 0 Montenegro
“In all honesty, the excitement that surrounding England’s two opening wins against Bulgaria and Switzerland passed very quickly indeed. The post-South Africa combination of jitters and lethargy seems to be lingering over the national team like an unwanted smell and even the press build-up to this match – Look! Rio’s Back! – doesn’t seem to lift the feeling of torpor surrounding a European Championship qualifying group that feels more like a chore. The only thing worse than qualifying would be not qualifying. In the tunnel before the match, Steven Gerrard appears to be holding a Wham! bar and, during the national anthems, Wayne Rooney maintains the facial expression of a man that could quite do with a roll-up. It’s that sort of evening.” (twohundredpercent)

“The Referee” by Mattias Low

“Swedish director Mattias Löw, of the production company Freedom From Choice, shared with me a short documentary called “The Referee,” about the unfortunate Martin Hannson, who officiated the France-Ireland qualifier last fall and failed to call Thierry Henry’s decisive handball.” (Soccer Politics)

“Steven Naismith scored a goal he will never forget – but it was not enough to secure a point against Spain at Hampden. Naismith sparked an impressive comeback after Scotland had fallen behind to David Villa’s penalty and strike from Andres Iniesta, before a Gerard Pique own goal set the home side on course for a precious point.” (ESPN)