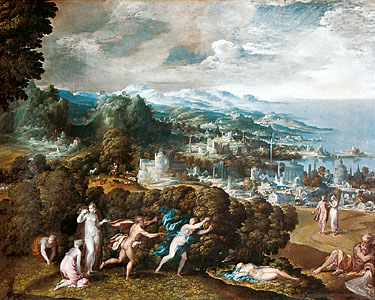 The Story of Aristaeus, Niccolò dell’Abate
“Mbombela is one of the most atmospheric new stadiums built for next year’s World Cup, nestled among the beautiful hills of northeast South Africa and supported by orange pylons that resemble giraffes. But the almost 1.3 billion rand ($172 million) stadium has been tarnished by a string of scandals, including the murder, apparently by professional hitmen, of a municipal official who blew the whistle on alleged corruption and malpractice.” (FourFourTwo)

This entry was posted on Thursday, October 29th, 2009 at 7:00 pm and is filed under Uncategorized. You can follow any responses to this entry through the RSS 2.0 feed. You can leave a response, or trackback from your own site.