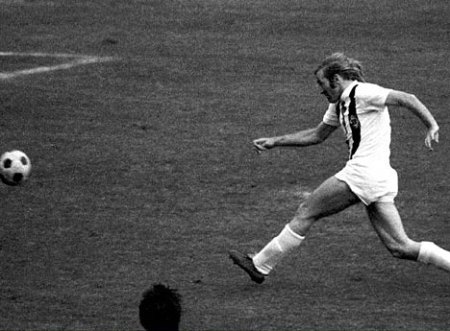 Günter Netzer
“Ralf Bönt has been the captain of the German writer’s national team. In his younger years, he played for Arminia Bielefeld. In addition to his books, he wrote the soccer story ‘Eating.’ He calls his Ultimate XI the ‘team of the great unfinished,’ a reference to terrific players who never realized all their dreams. Of his Ultimate XI, only two are from outside Germany.” (NYT)

Gomes sets sights on World Cup (BBC – Tim Vickery’s)
“Last week I was on a Brazilian TV programme that was covering the build up to the first leg of the Copa Libertadores final between Cruzeiro against Estudiantes of Argentina (which, incidentally, finished 0-0 – second leg on Wednesday). Also appearing on the show was Tottenham goalkeeper Heurelho Gomes, who made his name with Cruzeiro earlier this decade. He was asked about his childhood idols – and named one of his predecessors in the club’s goal, Dida.”

Arsenal will not miss Adebayor (BBC – Phil McNulty )
“Michael Owen unveiling a brochure to attract buyers for himself is one thing – Arsenal fans doing likewise to attract a buyer for Emmanuel Adebayor is another. While Owen’s glossy pages spoke of ‘The Athlete, The Ambassador, The Icon’, a replica produced by a group of Arsenal fans made a series of claims on Adebayor’s behalf that were not altogether flattering.”

A starting XI of transfer questions (SI)
“It has been a weird summer of transfers. Most of Europe’s top leagues kick off next month and yet, with a few exceptions (Real Madrid and, to a lesser degree, Juventus and Bayern Munich), there hasn’t been too much going on. The window won’t close until Aug. 31.”

The Beckham Experiment Review: Showbusiness and Soccer (Pitch Invasion)
“Failure is almost always a more interesting subject for a book than success. Grant Wahl did not originally intend to spend 16 months following the dramatic disaster that was the David Beckham Experiment in America: but when Beckham’s celebrated arrival as the saviour of American soccer degenerated into a farce of injuries and infighting at the Galaxy, the juicy tale of how the biggest investment in American soccer history resulted in one of the worst team meltdowns ever in MLS became the story he had to follow all the way through.”

World Cup Construction Workers End Strike (NYT)
“Construction workers have agreed to end a weeklong strike that threatened to derail the completion of already tightly-scheduled projects for the World Cup, union officials and employers said Wednesday. Workers agreed on a pay increase of 12 percent, below the earlier demand of 13 percent, and work at sites across South Africa is to resume on Thursday.”

What Makes A Classic Football Match? Part 4: Manchester United 1-4 Liverpool (EPL Talk)
“Even after the mind-shattering come-from-behind win on 13 September (see Part 3), I couldn’t let myself feel too optimistic about the trip to Old Trafford. (Going into the biggest matches, I try to remain spiritually pragmatic.) 1-1 at O.T. would be a wonderful result.”

Good Grief, Is He Still Here? (A Cultured Left Foot)
“First of all, every thought should go to John Hartson and his family following the neurosurgery he underwent yesterday as a result of his cancer. By comparison the transfer news is trivial. It might not be in the minds of the individuals involved but in the greater scheme of things, it is. Adebayor is apparently stalling on the deal. The media, no doubt fed by the disgruntlement at Arsenal and hoping to pass it onto Manchester City fans.”