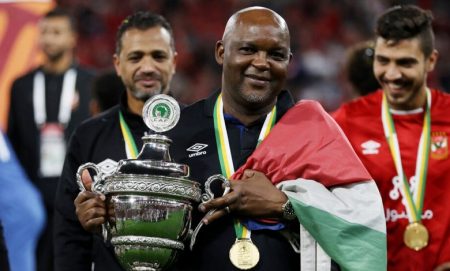 Pitso Mosimane with the African Super Cup, one of the three continental titles he won with Al Ahly in 2021.
“Pitso Mosimane has done enough winning in the last year, plus change, to talk about nothing else. In November 2020, only three months after he was appointed manager of the Egyptian club Al Ahly, he won the African Champions League title. He did so by beating Zamalek, Al Ahly’s fiercest rival. The final was cast as the derby of the century. Nobody in Egypt thought it was an exaggeration. Eight months later, he repeated the trick. The calendar contracted and concentrated by the pandemic, Al Ahly returned to the Champions League final in July to face Kaizer Chiefs, the team Mosimane had supported as a child in South Africa. He won again. He was showered with golden ticker tape on the field, then presented with bouquets of roses by government grandees when he returned to Cairo. …”
NY Times

This entry was posted on Monday, January 17th, 2022 at 11:46 pm and is filed under African Nations Cup, Champions League, Copa Libertadores, Egypt, FIFA, NY Times, World Cup. You can follow any responses to this entry through the RSS 2.0 feed. You can leave a response, or trackback from your own site.