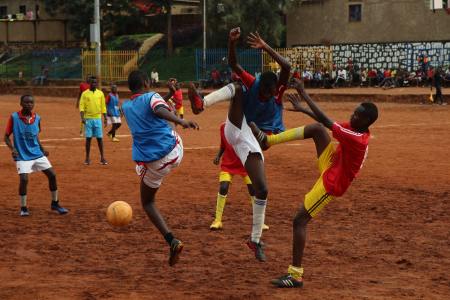 “The 33rd edition of the African Cup of Nations began today, Sunday, 9 January, in Cameroon. AIAC founder and editor Sean Jacobs joins Will to talk about the history of the tournament, its contemporary politics, and its relationship to the hegemony of European football. The most important question of all, of course, is who will win this year’s showpiece? Listen below for some predictions.”
Africa Is a Country 1:11:15 (Audio)

Roger De Sá is already looking beyond the Afcon

24 September 2013: Orlando Pirates coach Roger De Sá reacts during an MTN 8 semifinal match against Kaizer Chiefs at Orlando Stadium in Soweto.
“Roger De Sá is not giving too much thought to the possibility of setting a South African record of sorts at the 2021 Africa Cup of Nations (Afcon), which kicked off on 9 January and runs until 6 February. An Afcon winner with Bafana Bafana back in 1996, albeit as an unused substitution, the former goalkeeper could become the first South African to win a second gold in Africa’s premier competition should he help Egypt become champions for an eighth time.  De Sá is coach of the Pharaohs. …”
New Frame
W – Roger De Sá

“Monaco’s shock removal of Niko Kovac over Christmas fell somewhere between eye-wateringly ruthless and bafflingly naive. Before Kovac was appointed in the summer of 2020, relegation was Monaco’s greatest concern. Thierry Henry’s disastrous reign was followed by the ill-advised re-appointment of Leonardo Jardim, who had won the title with the club in 2017, before he was sacked for the second time in 14 months in December 2019. Spanish coach Robert Moreno then lasted just 13 games before Kovac arrived. Monaco barely survived, finishing 17th in the 2018-19 season before struggling to ninth in the following campaign. Nevertheless, Kovac’s team entered the final day of last season with a chance of winning the title. …”
Guardian