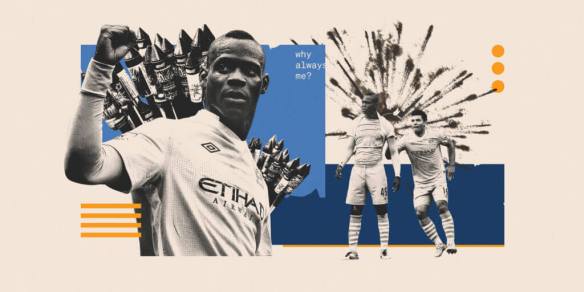 “Amid the rolling countryside of rural Cheshire, the village of Mottram St Andrew belongs to a footballers’ enclave known locally as the ‘Golden Triangle’. Prestbury, the neighbouring village, was once calculated to have the highest number of millionaires per head in the country. Wilmslow, a couple of miles in the other direction, is another place for the people who could be described as the haves and the have-yachts. Nowhere, though, is showier than Alderley Edge, where car enthusiasts gather every weekend to take pictures of the souped-up Ferraris and Lamborghinis that roar up and down the high street. … Then, on the night of October 21, 2011, the peace was shattered. …”
The Athletic (Video)
W – Mario Balotelli
YouTube: Manchester United 1-6 Man City – Highlights & Goals – Mario Balotelli: Why Always Me?