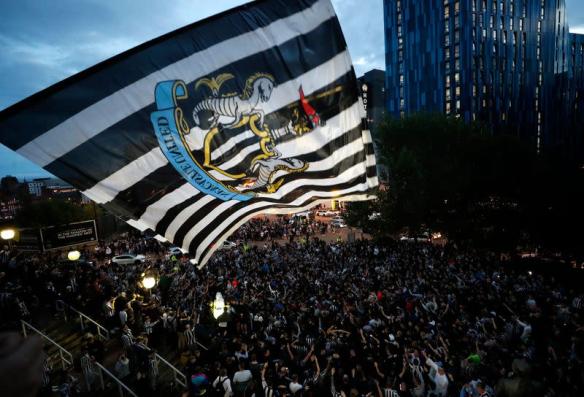 “One single sentence, printed in block capitals, emblazoned on a laminated banner, captured it all: all of the pain and resentment and angst and fury of all those years spent under the turgid, wearying, bleak years of Mike Ashley’s ownership of Newcastle United, that decade and a half when the club’s owner seemed to take pleasure, after a while, in draining his own fans of spirit, and pleasure, and hope. The sentence on the banner made its first appearance nearly seven years ago, at what turned out to be just the halfway point of Ashley’s tenure. It was a reference to that dispiriting habit his club had developed of spurning England’s two domestic cups — the two trophies the club had even the slimmest chance of winning — so much that, often, the team looked as if it was trying to get knocked out early on purpose. …”
NY Times
NY Times: Saudi-Led Group Completes Purchase of Newcastle United
Guardian – Player’s view: Newcastle fans deserve change of fortune after long decline
Guardian: Saudi takeover of Newcastle leaves human rights to fog on the Tyne (Video)
BBC – Newcastle United takeover: Phil McNulty asks what Magpies should do in their new era (Video)
BBC – New era for Newcastle United (Video)
Guardian: Amnesty urges Premier League to block Saudi-backed takeover of Newcastle
BBC – Newcastle United takeover: Fans reflect on Mike Ashley years
******English football should be different – it is in thrall to money, no matter where it comes from
*****Shearer: Ashley’s Newcastle was a shell of a club – now he’s gone I’m excited…but conflicted by Saudi involvement (Video)